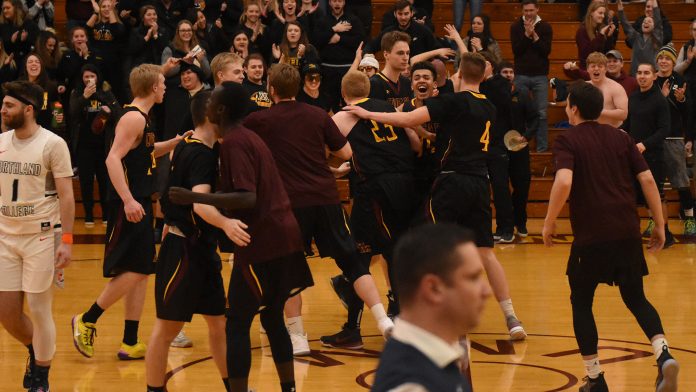 “I am very proud of this group,” head coach Dave Molesworth said. “At the beginning of the meet we talked about how important every point was and to see this team fight for every point and take 4th place by just two points. It was a fantastic way to end a great season.”

Freshman Olivia Salzwedel placed seventh in the 100-yard freestyle with a time of 56.90. Along with Salzwedel, Sierra Walker finished 10th (57.35) and Liz Melssen placed 11th (57.96), respectively.

Caitlin Papke recorded a time of 2:14.62 in the 200-yard backstroke to finish sixth overall.

In the 400-yard freestyle relay, Papke, Walker, Malia Stone and Salzwedel combined for a time of 3:47.02 to finish sixth.

MEN’S BASKETBALL
MORRIS – The Upper Midwest Athletic Conference (UMAC) Game of the Week lived up to the hype as the Minnesota Morris men’s basketball team outlasted the North Central LumberJacks, 70-68, Saturday at Jim Gremmels Court. With the win, the Cougars now advance to the UMAC Tournament as the No. 5 seed and will play at fourth-seeded Crown on Monday, Feb. 18, at 7 p.m.

“I’m extremely excited about our effort tonight and making the UMAC tournament,” head coach Paul Grove said. “It was a fun night at the Cougar Den and a great way for our seniors to leave Jim Gremmels Court.”

It was Minnesota Morris that recorded the first points of the afternoon on a layup from James Pendleton 34 seconds into the game, but it was Northland (9-16, 7-9 UMAC) that built a 17-6 lead with 12:17 to go in the first half.

Minnesota Morris responded though as Nick Peterson’s layup with 7:02 remaining in the first half capped off a 15-0 run to give the Cougars a 21-17 lead.

The Cougars took a two-point lead over LumberJacks into halftime with the score at 28-26.

The second half saw the Lumberjacks start out strong, as they scored the first six points to take a 34-28 lead with 17:18 to play. Northland built its lead to as much as 10 points with 9:16 to play (57-47), but the Cougars started making their comeback.

With 5:20 to play in regulation, Pendleton connected on a 3-pointer to give the Cougars their first lead of the second half at 62-61.

Grove, playing in his final game at Jim Gremmels Court, scored the final six points for the Cougars down the stretch.

On his second of two free throws, Grove tied the contest at 65-65 with 2:50 to play. Two possessions later, Grove made a layup and the free throw for the old-fashioned three-point play to put the Cougars in front 68-65.

The LumberJacks then responded with a 3-pointer from Arqueros Jr. to tie things up at 68-68 with 1:45 to play.

Northland had a chance to take the lead late in the game, but turned the ball with 26 seconds left in regulation. The Cougars brought the ball down the court and Grove was fouled driving to the basket.

Grove then made both free throws to finish the night with 17 points and help lead the Cougars to the victory and a berth in the UMAC Tournament.

“So happy to see our three seniors end their careers at home with a great game,” head coach Tim Grove said. “They all played well and it was great to be able to pull them each out to get the recognition they so deserve. We now look forward to the opportunity we have Wednesday night in Mankato.”

The Cougars closed out the Upper Midwest Athletic Conference (UMAC) regular season as the No. 3 seed and will travel to Mankato, Minnesota, to take on Bethany Lutheran on Wednesday, Feb. 20, at 5:30 p.m.

Minnesota Morris jumped out to an 8-2 lead as Raths scored five points early in the game. With the first quarter in the books, the Cougars led the LumberJills, 18-13.

The second quarter saw Minnesota outscore Northland by 12. Midway through the second quarter, the Cougars hit back-to-back 3-pointers from Zoe Loucks and Raths to extend their lead to 13 at 33-20. At halftime, Minnesota Morris led Northland, 44-27.

The Cougars and LumberJills both scored 20 points over the final 10 minutes of regulation to give Minnesota Morris the 89-59 victory.