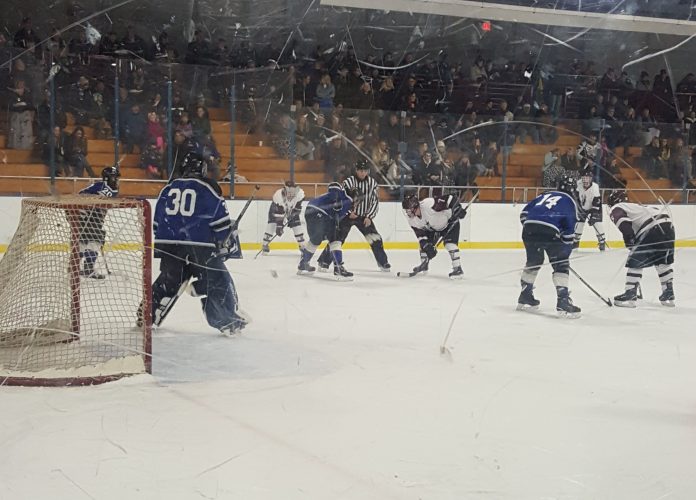 Trailing 3-1 entering the third period, the Storm got two quick goals from Zander Hoffman and Brady Goff to tie it at three before the North Stars Brady Miller broke free for a breakaway goal to take the lead back 4-3 with just over seven minutes remaining.

The resilient Storm responded when Brady DeHaan knocked in a rebound less than a minute later, and the game went into overtime after each goalie turned back multiple scoring opportunities late.

After nearly 18 minutes of back-and-forth overtime hockey, Fletcher was able to squeeze one past a sprawled out Chase Engebretson for the winner.

Engebretson was phenomenal in net for the Storm, stopping 68 shots, including stoning Miller twice and Fletcher on breakaways that could’ve ended their season.

Matt Tolifson opened the scoring in the first, Kolby Goff, Reece Kuseske, and Jack Riley each tallied assists for the Storm who’s season ends with a 8-14 record.

Eli Fletcher scored twice for the Stars and Isiah DeFoe stopped 23 shots as they improve to 18-7-1 and will face 2nd-seed Sartell-St. Stephen in the quarterfinals.

Ortonville 78, Hancock 62
ORTONVILLE – Four Owls scored in double-figures but Hancock couldn’t close the gap on Ortonville in the second half, falling 78-62 on Saturday.
Hancock went just 8-31 from three-point range and trailed by 16 at halftime. Although they came alive in the second half, the Owls couldn’t slow down the Trojans attack led by Tyson Powell who finished with a game-high 23 points.
Cole Reese had 16 points for the Owls, Bennett Nienhaus added 13, Preston Rohloff and Connor Reese each chipped in 10 as Hancock falls to 15-5, 6-2 in the Pheasant Conference.
DaVonte Edwards scored 16 for Ortonville who is 13-2, 7-0 in conference.

West Central Area 95, Wheaton/Herman-Norcross 39
BARRETT – West Central Area set two school records in a dominant 95-39 rout of Wheaton/Herman-Norcross.
The Knight shot 69 percent from the floor, including 13-18 from long range, both school records, and the team tallied 24 assists while 11 different players scored.
Grant Beuckens led with 21 points, six assists, and four steals. Jack Van Kempen added 15 points with seven rebounds, Brady Reeve and Jacob Bright each had 13, while Teigen Moritz chipped in 12 points.
The Knights are now 12-6 on the season, 6-2 in the Pheasant Conference. The Warriors are 6-12, 1-6 in conference.

Brandon-Evansville 65, Rothsay 45
EVANSVILLE – Brandon-Evansville hit 11 threes and cruised past Rothsay 65-45 on Saturday in Evansville.
Tanner Bitzan had 12 points with 12 rebounds, Marshall Riedel scored 12 with four assists and three steals, while Keagan Schiele added seven points and 11 rebounds.
The Chargers have won three straight and are 11-10 on the season, 6-4 in the Little Eight Conference. The Tigers fall to 5-16, 1-9 in conference.

West Central Area 55, Brandon-Evansville 50
BRANDON – West Central Area won the Pheasant Conference championship with a hard fought 55-50 victory over Brandon-Evansville on Saturday.
The Chargers entered Saturday at 7-0 in conference play, while the Knight were 8-1 before their lone matchup of the season.
West Central Area was able to open up a 15-point lead in the second half before the Chargers began to slowly chip away, eventually pulling within two with just a minute to play.
The Knights were able to lockdown on defense and hit some clutch free throws late to seal the win.
Ella Van Kempen had 17 points with eight rebounds, and three blocks for the Knights, Lexi Bright added 15 points, five steals, and four assists as they improve to 16-6. The Chargers are 14-8.

Section Meet
PERHAM – The MAHACA Tigers gymnastics season came to an end at the section 8A meet in Perham on Saturday, with the Tigers taking eighth place.
Tasha Koehl stuck her beam routine in an otherwise tough day for the Tigers. Taylor Kill set a personal best on the bars (6.85), and Jodi Snell was voted section assistant coach of the year. Detroit Lakes is the conference champion, with Perham, Fergus Falls, and Alexandria finishing 2-4.