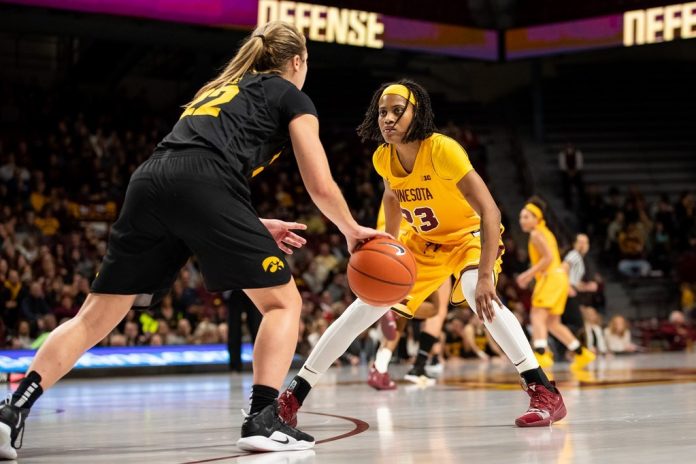 The Gophers’ six straight conference wins tie for the third longest in program history. The only longer streaks came when they won 11 in a row from Feb. of 2003 to Jan. of 2004, the junior and senior seasons of head coach Lindsay Whalen, and seven straight from February to March of 2003, Whalen’s junior year.

Sophomore Destiny Pitts led all scorers with 22 points, her third straight 20-point game, and dished out a career-high six assists. In her last eight games, she’s averaging 19.8 points per contest while shooting 44.1 percent from 3-point range.

Junior Taiye Bello recorded her 10th double-double of the season with 14 points and 13 rebounds. She was a perfect 7-of-7 from the floor, marking just the eighth performance in team history, and her second this year, with that many attempts without a miss. Earlier this year, she was 9-of-9 at Michigan on Dec. 31. Janel McCarville and Amanda Zahui B. are the only other players in team history to have multiple games where they’ve attempted at least seven shots and not missed.

The Lady Lions actually opened the game on a 9-2 run, but Minnesota followed by scoring the next 16 points and 20 of the next 22 to take a 22-11 lead. The Golden Gophers finished the first quarter up 28-17.

After scoring 14 points in the fourth quarter last Thursday at Purdue, Pitts followed with 13 points in the first quarter Sunday, giving her 27 points in a two-quarter span. Those two quarters are the highest scoring quarters for any Gopher this year.

The Gophers didn’t let up in the second quarter, starting the frame on a 9-0 run and outscoring the Lady Lions 31-17 in the quarter. The 31 points marked their second most in any quarter this season, and their most in Big Ten play. The Gophers were red-hot from the field, making 12-of-15 (80.0) shots in the quarter.

Minnesota went into the locker room at halftime leading 59-34, marking the sixth-highest point total for one half in program history. Pitts scored 17 of her 22 points in the first half, while Bell had 13 of her 17.

In the second half, Penn State never got within 25 points, and Minnesota held its biggest lead of 36 points when senior Palma Kaposi scored to make it a 91-55 game with 4:32 remaining. All eight Gophers who played got into the scoring column.

Minnesota is back in action next Thursday when it travels to No. 7 Maryland.