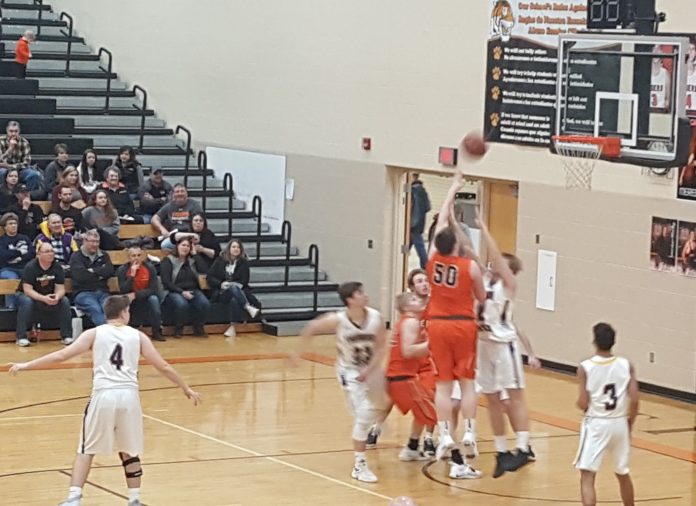 Morris Area/Chokio-Alberta 67, Montevideo 44
MORRIS – 10 different Tigers scored in Morris Area/Chokio-Alberta’s 67-44 win over Montevideo on Monday at the Tiger Center.
Camden Arndt led with 19 points, six rebounds, and six assists while Jackson Loge added 18 points with eight rebounds, Jaret Johnson and Zach Hughes each chipped in seven points for the Tigers who shot 48 percent while holding the Thunder Hawks to 33 percent.
The Tigers are 13-8 on the season, 8-6 in the West Central Confernce. Montevideo got eight points and seven rebounds from Jackson Snell as they fall to 1-17 overall, 1-12 in conference.

Brandon-Evansville 53, Rothsay 38
EVANSVILLE – For the second time in three days the Brandon-Evansville Chargers defeated Rothsay, this tim 53-38 in Evansville.
Three Chargers scored in double-figures led by 14 apiece from Marshall Riedel and Keagan Schiele, with Schiele dishing five assists and grabbing nine rebounds. Tanner Bitzan added 12 points with 11 rebounds.
The Chargers held the Tigers under 20 points in each half and have won four straight to improve to 12-10 overall, 8-8 in the Little Eight Conference. The Tigers fell to 5-17, 1-10 in conference.

Morris Area/Chokio-Alberta 74, Benson 62
MORRIS – Emma Bowman led four Tigers in double-figures scoring with a game-high 22 and Morris Area/Chokio-Alberta defeated Benson 74-62 on Monday.
Bowman also grabbed seven rebounds while Maddie Carrington had 14 points with seven rebounds, Riley Decker added 11 points, and Malory Anderson posted a double-double with 13 points, 11 rebounds, and six steals.
The Tigers shot 8-16 from three-point range and closed out the first half on a 17-4 run to take a 16 point lead into halftime.
The Braves were resilient, trimming the deficit down to six in the second half but they couldn’t get any closer than that. Claire Ricard had 21 points for Benson, Kaitlyn Berreau had 14, Hannah Andrews and Abbit Mittness each added nine as they fall to 7-16, 3-8 in conference play. The Tigers meanwhile are 12-8 overall, 6-5 in conference.

Hancock 51, Wheaton/Herman-Norcross 42
HANCOCK – Hancock held Wheaton/Herman-Norcross to just 28 percent shooting and earned a 51-42 Pheasant Conference victory on Monday.
The Owls recorded 18 steals and held the Warriors to just 17 second half points.
Lexi Staples and Carlee Hanson each had 13 points, with Hanson added six rebounds for the Owls, Rylee Hanson scored nine with 11 rebounds and Hancock improved to 9-11 overall, 3-7 in conference play.
Izzy Schmidt led the Warriors with 10 points, Ellissa Rinke added nine as they fall to 8-15, 5-6 in conference.