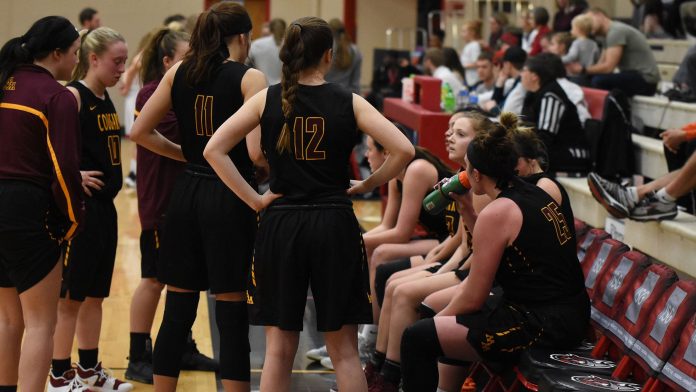 UMAC Semifinals
MANKATO – The No. 3-seeded University of Minnesota Morris women’s basketball team concluded its 2018-19 season with a 72-62 loss to the No. 2-seeded Bethany Lutheran Vikings in the semifinal round of the Upper Midwest Athletic Conference (UMAC) Tournament Thursday night.

“I’m very proud of our team’s effort tonight,” head coach Tim Grove said. “We did some really good things, but couldn’t overcome the difference at the 3-pt line. Bethany shot 7-15 compared to our 3-12. And it’s tough to see these seniors finish up decorated careers. I’m a very proud coach.”

The Vikings held their largest lead of the first half at eight points with 3:01 to go, but the Cougars scored six straight points to cut the Bethany Lutheran lead to two at halftime – 32-30.

With the first 20 minutes of play in the books, Eagle Chasing led the Cougar offense with 11 points.

The third quarter saw Bethany Lutheran extend its lead to 12 points at 7:07 before the Cougars made it a three-point game with 3:41 to go at 48-45. The Vikings closed out the third quarter with an eight-point lead with the score at 54-46.

In the final quarter, Bethany Lutheran built an 11-point lead three minutes in and the Cougars weren’t able to get closer than seven points.

Down the stretch, Becca Holland hit a jumper with 51 seconds left in regulation to bring the Cougars within seven at 69-62, but the Vikings made their next three free throws to secure the 72-62 victory.