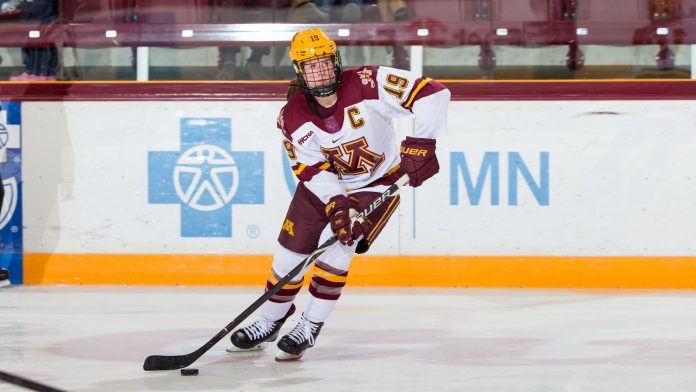 WOMEN’S BASKETBALL
BEMIDJI – Kelly Pannek led the way with a hat trick and linemates Sarah Potomak and Amy Potomak recorded three points each to lead the No. 2 Golden Gopher women’s hockey team to a 6-3 win on the road at Bemidji State on Friday afternoon.

Pannek’s natural hat trick put the Gophers ahead 5-2 in the second period, and Minnesota (28-4-1, 18-4-1-0 WCHA) received nine points from the Pots and Pan line as S. Potomak added a goal and two assists and A. Potomak tallied three assists. Taylor Wente opened the scoring for the Maroon & Gold, and Taylor Heise (1g-1a) closed out the game with an empty-net goal as well.

Alex Gulstene finished with 29 saves, and Minnesota was outshot 32-31 for the game.

Bemidji State (13-18-2, 10-11-2-0 WCHA) received goals from Lindsey Featherstone, Paige Beebe, and Abby Halluska along with a 25-save effort from goaltender Lauren Bench.

“It was a solid win on the road here against a great opponent,” head coach Brad Frost said. “Getting out to that 2-0 lead was big. We surrendered that quickly but were able to get back up 3-2, 4-2, and then 5-2. It wasn’t the prettiest game, but it was a big night from Kelly Pannek, Sarah Potomak, and Amy Potomak. Nice to see Kelly putting the puck in the net there tonight. Overall a good win, and we’re excited about tomorrow.”

The teams combined for a five-goal first period. Wente put Minnesota on top 1-0 just 26 seconds into the game before S. Potomak extended the lead to two less than five minutes into the game; however, the Beavers responded with a pair of goals from Featherstone and Beebe to tie it at 2-2 midway through the opening frame.

Pannek scored her first of three consecutive goals at the 14:22 mark of the first period, giving the Gophers a lead they would not relinquish. She completed her natural hat trick with a power-play goal at 8:37 of the second stanza and an even-strength tally with 5:18 remaining in period two.

The Beavers cut the lead to two with a goal from Halluska just 28 seconds into the third period but could not solve the Gophers again, and Heise sealed the win with an empty-net goal with 18.6 seconds remaining.

Minnesota was one-for-three on the power play against the WCHA’s top penalty kill, which entered the game having allowed just nine power-play goals this season, while holding the Beavers scoreless on their lone opportunity with the skater advantage.

The teams meet in the regular-season finale at 3:07 p.m. CT Saturday at the Sanford Center.

SOFTBALL
TUSCALOOSA – The No. 24/RV University of Minnesota Gophers took No. 6/6 Alabama all the way to bottom of the seventh inning with two outs but the Crimson Tide knocked a walk-off single to center to win 1-0 this evening.

Amber Fiser was gutsy in the circle. She went 6.2 innings with five strikeouts while only allowing four hits and one run. She is 3-3 on the season despite an impressive 0.83 ERA and 46 strikeouts on the season.

The Gophers threatened in the top of the second inning. Hope Brandner led off the inning with a walk and Katelyn Kemmetmueller followed with single that took a fast roll past a diving shortstop. The Gophers put in Macy Gill to pinch run at second but were not able to move the runners.

Alabama placed two runners on in both the second and the fourth but Fiser and Gophers were able to get out unharmed both times with third out strikeouts.

Minnesota’s best scoring chance of the game came in the fifth inning. Emma Burns reached second with one out on the board after an error in deep right field. She moved to third on a Carlie Brandt groundout but Alabama was able to get out of trouble with a strikeout.

Both teams went down in order in the sixth. Anne Miller drew a two-out walk in the top of the seventh but Alabama was again able to get out without allowing a run.

The Crimson Tide recorded a lead off single in the bottom of the seventh and moved the runner on a sacrifice bunt. Fiser recorded a strikeout for out two but the next batter was able to connect on a single to center to end the game.