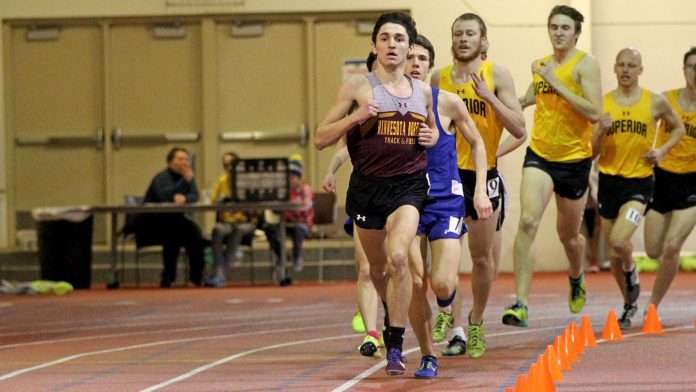 INDOOR TRACK & FIELD CHAMPIONSHIPS
DULUTH – The Minnesota Morris track & field program opened up the 2019 Upper Midwest Athletic Conference (UMAC) Indoor Track & Field Championships with three first-place finishes as Minnesota Morris won the men’s mile and swept the 400-meter dash. After day one, the women are in third with 55 points and the men are in third with 44 points.

“Finishing day one with three first place finishes, a meet record, a school record, and six other UMM top-10 performances really shows that our men and women were ready to compete this weekend,” head coach Jessica Devine said. “Adding the countless other points scored and personal records achieved, we really couldn’t have asked or a better way to start the UMAC Championships. We had a fantastic energy filling the fieldhouse today and look forward to another great team effort tomorrow!”

The Cougars swept the 400-meter dash for the second straight year as Emily Ciesynski and Justin Pearson defended their 2018 titles. In the women’s race, Ciesynski clocked in at 59.12, which topped her own school record, and Pearson finished the men’s race with a time of 51.12.

Sophomore Sierra Walker recorded a third-place finish in the women’s high jump as she cleared a height of 4-8.25.

Freshman Jenna Benson captured a third-place finish in the women’s long jump with her distance of 15-7.

Pearson posted the top time in qualifying in the men’s 60-meter dash as he ran a meet record time of 6.99, which tied his school record from earlier this season.

The UMAC Indoor Track & Field Championships conclude Saturday, Feb. 23, with the field events getting underway at 11 a.m. and the track events are scheduled for noon.