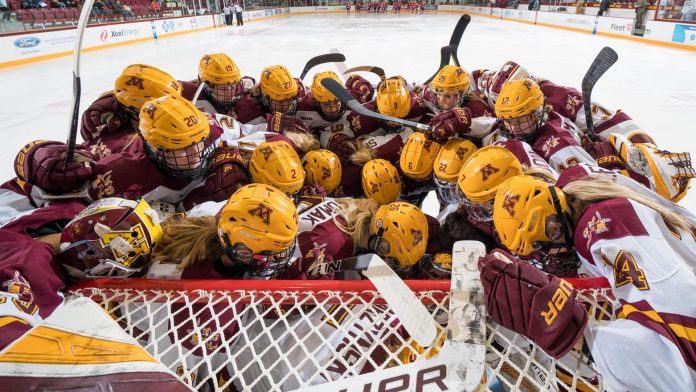 WOMEN’S HOCKEY
BEMIDJI – The Golden Gopher women’s hockey team used a 4-3 win on the road at Bemidji State to wrap up the regular season as WCHA champions on Saturday. Minnesota’s win coupled with a Wisconsin tie secured the outright regular-season conference title, conference tournament number one seed, and WCHA First Round bye for the Maroon & Gold.

The Beavers were led by Abby Halluska’s two-goal effort and got 23 saves from Kerigan Dowhy. BSU had a 28-27 advantage in shots on goal for the game.

As WCHA champions, the Gophers receive the conference tournament number one seed and a first-round bye straight to the WCHA Final Faceoff, which will be held at Ridder Arena, Saturday, March 9 and Sunday, March 10.

The winner of the 2019 WCHA Final Faceoff receives the league’s automatic bid into the NCAA tournament.

MEN’S HOCKEY
MINNEAPOLIS – The Gopher Hockey program closed out the Big Ten regular-season schedule with a 2-1 victory over No. 16 Notre Dame on Saturday at 3M Arena at Mariucci as Minnesota locked up a winning record in conference play for the fifth time in six years of Big Ten play.

Nanne put the Gophers up early with a first period goal at 8:53 when he was left all alone at the top of the slot and scored his fourth goal of the year. Rem Pitlick and Brent Gates Jr. found the junior defenseman out in front. Nanne and Gates both tied their single-season career highs for points on the play as Nanne picked up his 10th point of the season and Gates picked up his 26th. Pitlick, who saw his career-long 13-game point streak come to an end on Friday, bounced back with his team-leading 38th point of the year and has still not been held without a point in back-to-back games this season.

The Gophers answered back minutes later with the eventual game-winning goal off the stick of Reedy, who has now picked up goals in three of the last four games. The sophomore forward picked up his sixth goal of the season at 9:28 of the second period off assists from Garrett Wait and Ryan Zuhlsdorf.

Minnesota closes out the regular season next weekend with a nonconference series against Arizona State (March 1-2) at 3M Arena at Mariucci. Both games are slated for 7 p.m.

BASEBALL
DALLAS – The University of Minnesota baseball team scored five runs in the seventh inning en route to a 9-7 win over Dallas Baptist. With the win, the Golden Gophers (2-4) even the series at 1-1. Dallas Baptist (4-2) won the first game Friday night. Series finale will be held at 1 p.m., tomorrow.

Patrick Fredrickson garnered his first win of the season and is now 1-1 this year. He pitched 5.2 innings, threw 105 pitches, and allowed one earned run. The Gophers utilized four pitchers in the win, as Brett Schulze, Nolan Burchill and Max Meyer all saw action. Meyer also collected a save in the win, his second this season.

Minnesota got on the board in the top of the third when McDevitt delivered a two-out single that scored two. Kozicky started the inning off with his first extra base hit of the season on a double to left center. Zack Raabe followed with a walk. After another walk by Wilson with two out, McDevitt hit a single through the left side as both Kozicky and Raabe scored.

The Patriots cut the Gopher lead to one when it scored one in the bottom of the fourth. With two on, the Gophers got two outs to put the runners on the corners. A wild pitch, however, scored the run. With Patriots threatening with two on at second and third, Fredrickson was able to get Herbert Iser to ground out to short for the out.

Minnesota got the run back in the fifth when a throwing error scored McDevitt. After back-to-back walks to McDevitt and Eddie Estrada, the Gophers scored on an error after a bunt attempt. The DBU catcher tried to get the leadoff runner McDevitt out at third, but the throw sailed into left field for the run.

The Gophers put up a crooked number when they capitalized on six hits for five runs and took an 8-1 lead. Wilson led off with triple when he hit it off the left field wall. The Wilson hit was the first of four-straight for the Gophers as McDevitt scored Wilson on a single, followed by singles from Estrada and Smith. A Jack Wassel RBI grounder scored the second run that inning. Ben Mezzenga lined one to left field, as another two scored. Kozicky, who walked earlier in the inning, came around to score on a Meyer single.

DBU’s Christian Boulware hit a solo home run in the bottom of the seventh, but the Gophers responded with a run in the top of the eighth. Easton Bertrand hit a double, while Kozicky followed with his second double of the game to bring the score at 9-2.

The Patriots posted three runs in the bottom of eighth. With one out, DBU had a hit and a walk. After a line out to right, Boulware hit a RBI single and Iser added a double.

Minnesota fought off the Patriots’ comeback after DBU scored another two in the ninth. After a single and a walk to start the inning, the Gophers got two outs. Down to their final out, the Patriots scored two and cut the Gopher lead to two. However, Meyer struck out the final batter to solidify the save and give the Gophers the win.