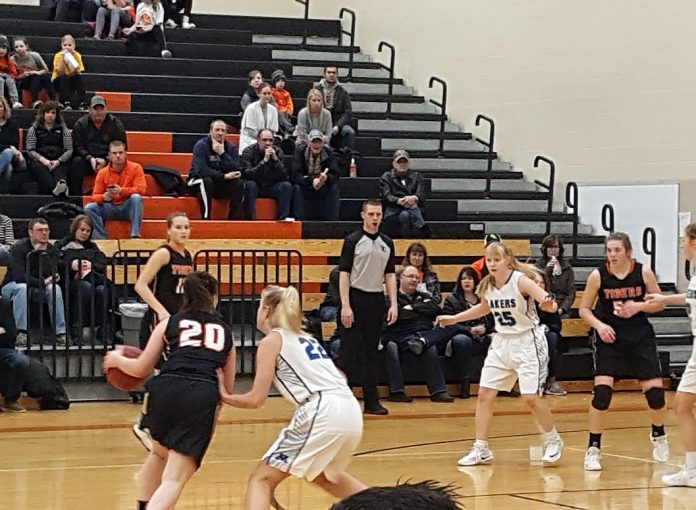 (4) Morris Area/Chokio-Alberta 60, (5) Minnewaska Area 44
MORRIS – Maddie Carrington carried the Tigers in the first half, Malory Anderson took over in the second and Morris Area/Chokio-Alberta earned a 60-44 win over Minnewaska in the section 3AA-North quarterfinals from the Tiger Center on Saturday.
Carrington scored 12 of her 15 points in the first half to help the Tigers take a 27-19 lead into the break. Anderson dominated the second half and finished with 16 points, 14 rebounds, and six steals.
Neither team shot well but the Tigers were able to force 20 Lakers turnovers, and hit 15 of 23 free throws on the day.
Kylie Swanson had eight points with five rebounds, the Tigers are now 15-8 and will face top-seed Eden Valley-Watkins in the sub-section semifinals on Thursday in Willmar, 6:00 start.

Brandon-Evansville 54, Ashby 50
BRANDON – Brandon-Evansville erased a nine-point first half deficit to earn a 54-50 win over Ashby on Saturday.
The Chargers were plagued by a slow start, but began chipping away in the second half before eventually pulling ahead. Kristin Kokett led with 13 points, Haddey Zastrow had 11 and Mikenna Pattrin added nine.
Courtney Koefod led the Arrows with 13, Amelia Barry added 11.
The Chargers end the regular season 15-9, 8-4 in the Little Eight Conference, while the Arrows fall to 6-18, 4-8 in conference.

Hancock 62, West Central Area 53
HANCOCK – Peyton Rohloff posted a double-double and Hancock pulled away in the second half for a 62-53 win over West Central Area on Saturday.
Rohloff had 17 points with 10 rebounds, Bennett Nienhaus score a game-high 20, Preston Rohloff had 13, Cole Reese added seven with eight assists, and Connor Reese pulled down 10 rebounds while scoring five.
Tiegen Mortiz had 14 points with 11 rebounds for the Knights who went into halftime tied at 25, but were unable to keep pace with the Owls in the second.
Gage Staples added 11 points as West Central Area falls to 13-8, 6-4 in the Pheasant Conference while Hancock moved to 19-5, 9-2 in conference.

Section 6A Tournament
WADENA – Two Bucs and three Knights are heading to the state wrestling tournament after their performances at the section 6A individual wrestling tournament from Wadena on Saturday.
Eli Larson is a champion at 106, while teammate Jace Olson took second at 113 for Border West. For West Central Area/Ashby/Brandon-Evansville Wyatt Olson is a champion at 195, while Anthony Sykora (126), and Jordan Lohse (138) had runner-up finishes.