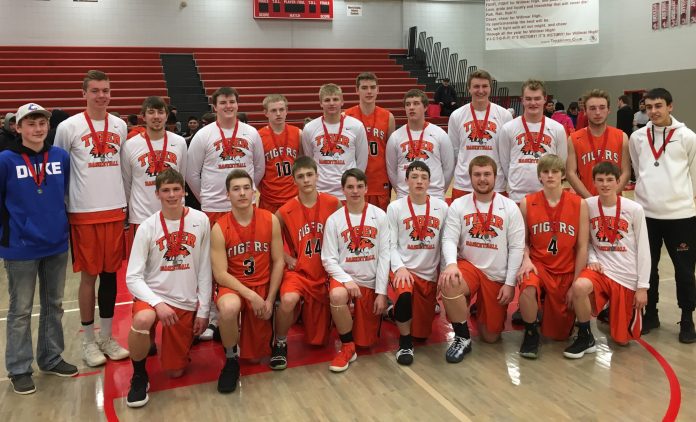 (4) Redwood Valley 86, (3) Morris Area/Chokio-Alberta 74
WILLMAR – Cole Woodford scored 32 points leading Redwood Valley past Morris Area/Chokio-Alberta 86-74 to claim the section 3AA-North title on Monday in Willmar.
The Tigers led 4-0 when the Cardinals 15-1 run, holding the Tigers without a field goal for nearly an eight-minute stretch and keeping a comfortable lead throughout the game.
The Tigers cut an 18-point second half deficit down to eight with two minutes to go, but couldn’t get any closer to the red hot Cardinals who shot 46 percent.
Bryant Haas came off the bench to score 17 with seven rebounds and the Cardinals improved to 15-11 on the year, advancing to face St. James for the section title.
Camden Arndt scored 25 points with 10 rebounds, Jackson Loge had 23 points, 12 boards, and Jaret Johnson added 16 for the Tigers who had their eight-game win streak snapped, ending their season with a mark of 18-9.

(2) Ortonville 58, (3) Hancock 39
MORRIS – Hancock was held to 28 percent shooting in a 58-39 loss to Ortonville from the Cougar Sports Center.
The Owls were just 3-22 from three-point range and were outrebounded 37-29. Bennett Nienhaus led with 18 points, Connor Reese had 11 points, six rebounds, and four assists, Cole Reese added eight points with eight boards and four assists as their season ends with a record of 20-7.
The Trojans were just 2-12 on threes, and 14-28 at the foul line, but shot over 50 percent from inside the arc.
Ortonville was led by Peter Treinen who had a game-high 21 points as they improve to 21-2 and will face Parkers Prairie for the subsection title on Wednesday.

(1) Parkers Prairie 61, (4) West Central Area 41
MORRIS – Parkers Prairie shot 50 percent from the field while holding West Central Area to just 37 for a 61-41 win at UMM.
The Knights trailed by just five at the half but couldn’t keep pace with the hot shooting Panthers.
Travis Yhonke and Josh Helling scored 16 apiece for the Panthers, Alex Koep had 11 while Noah Koep chipped in 10. The Panthers are now 23-4 on the season.
Gage Staples led the Knights with 16 points and eight rebounds, Jack Van Kempen added 10 points and eight boards as their season ends with a 15-10. 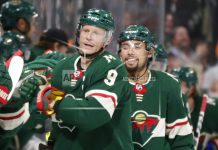 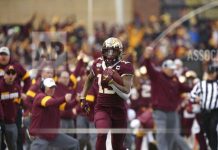 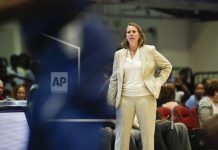