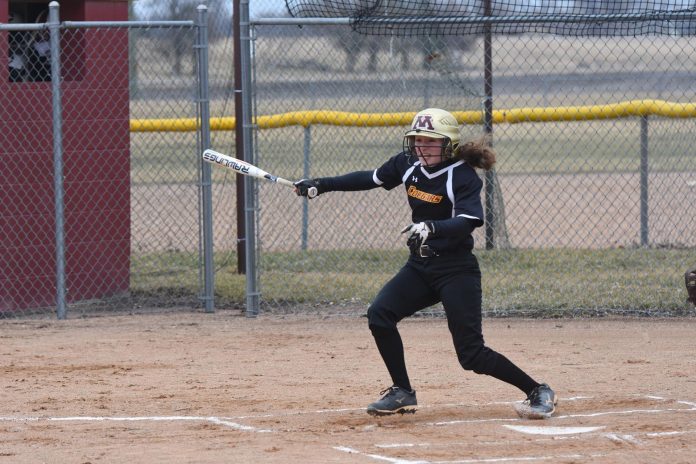 On the day, the Cougar offense scored 37 runs on 42 hits, while the pitching staff allowed just four hits and tallied 23 strikeouts in 15 innings of work.

Minnesota Morris won the first game 9-0 then recorded an 18-0 victory in game two and then posted a 10-0 win in the finale.

Game One
Behind a few early runs and eight strikeouts from Madison Langrehr, Minnesota Morris picked up a 9-0 win over North Central to begin the 2019 season.

The Cougars scored in the bottom of the first and never looked back. Emily Nordquist led off the inning with a single through the left side and then advanced to second on a fielder’s choice. After advancing to third on a stolen base, Nordquist scored on a Kallie Wycoff groundout to second base for the first run of 2019.

The fourth inning saw the Cougars tally four runs to bring their lead to 6-0 over the Rams. Morgan Mathews scored from second on a double to right center from Langreher and then she came home on a single up the middle from Nordquist. The Cougars tacked on a pair of runs as Dahlberg and Nordquist scored on an error from the Rams.

The Cougars closed out the game with three runs in the fifth inning to compete the 9-0 victory.

The offense then rattled off six runs in the third inning and then posted a 10-run inning in the top of the fourth to secure the 18-0 win.

On the mound in the second game, freshman Grace Penke tossed a one-hitter and struck out five in five innings in her debut donning the Maroon & Gold.

Game Three
Minnesota Morris completed the sweep of North Central with a 10-0 victory in the afternoon finale. As the home team in the neutral contest, the Cougars scored in each of the four innings that they were at the plate.

During the bottom of the first inning, the Cougars scored a run in five straight at-bats to build an early 5-0 lead.

Minnesota Morris then scored two runs in both the second and third innings, and then scored once in the fourth to make it 10-0. Three Cougars recorded two RBIs in the contest.

In her pitching debut, freshman Mollie Dummer recorded a no-hitter and allowed just two walks as she faced just 18 batters on the day.

The two teams are back in action on Friday, March 15, with three games beginning at 8:15 a.m. at the Plymouth Creek Center.

WOMEN’S TENNIS
LAKEVILLE, Minn. – The University of Minnesota Morris women’s tennis team (2-2, 1-0 UMAC) captured an 8-1 victory in its 2019 conference opener against North Central (1-4, 1-2 UMAC) Thursday at Lifetime Fitness.
Minnesota Morris recorded five victories in singles play over North Central. At No. 1 singles, Maddie Johnson tallied a 6-0, 6-1 victory over Emily Loop. At the No. 2 singles spot, Kate Obright defeated Madalyn Meetz by a score of 6-4, 6-4. Sam Tate posted a 6-2, 6-2 win over Sierra Hunter at No. 3 singles.

Kat Burquest cruised to a 6-0, 6-0 victory at No. 4 singles against Erin Oellerrich. Mackenzie Burris dropped a tiebreaker set to Nicole Swanson, as Burris won the first set 6-3, before Nicole Swanson won the second set 6-1 and then the tiebreaker set by a score of 10-3. Hannah Godzala tallied a 6-0, 6-0 win over Rachel Cribb at No. 6 singles.

In doubles play, the Cougars picked up all three victories over the Rams. At No. 1 doubles, the duo of Johnson/Obright defeated Hunter/Meetz by a score of 8-5. The Cougar duo of Tate/Burquest picked up an 8-0 victory over Oellerrich/Swanson at the No. 2 doubles spot and Burris/Auger topped Elllie Tieszen/Loop by a score of 8-2 at No. 3 doubles.

The Cougars are back in action on Thursday, March 28, against Crown. The match is set to get underway at noon in Lakeville, Minnesota.

In doubles play, the Cougars tallied wins at No. 1 and No. 2 doubles, as Flicker/Peters topped Josh Ekong/ Micah Peterson (8-1) and Riley/Knudson defeated Ramsby/Williams (8-6). North Central picked up the victory at No. 3 doubles as Vang/Cooper lost to Mendoza/Caleb Van Natta (3-8).

The Cougars are back in action on Thursday, March 28, against Crown. The match is set to get underway at noon in Lakeville, Minnesota.