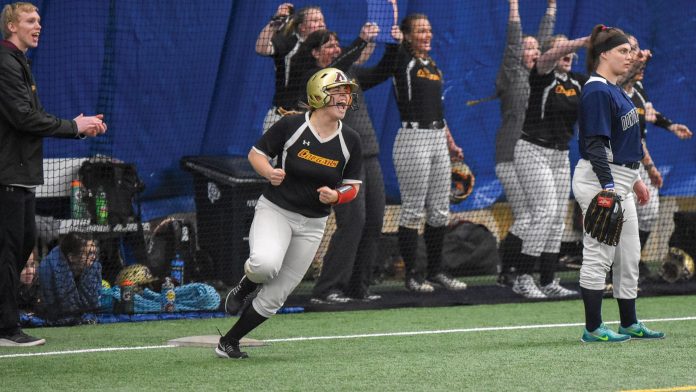 SOFTBALL
PLYMOUTH, Minn. – The University of Minnesota Morris softball team (6-0) picked up three victories over North Central (0-14) Friday at the Plymouth Creek Center. On the day, Minnesota Morris won by scores of 15-5, 5-0 and 11-0.

Game One Recap
The Cougars found themselves in an early deficit as North Central took a 3-0 lead in the bottom of the first on a Cougar error. Minnesota Morris got on the scoreboard in the top of the second as Lydia Mann came home from third while the Rams caught Carly Mahoney in a rundown.

The Rams tacked on a pair of runs in the bottom of the second on an Emily Loop double to make it a 5-1 contest. The Rams weren’t able to cross home plate after the second inning.

In the fifth inning, Mann recorded the first home run of her career, a three-run shot, to cap off a seven-run inning for the Cougars.

The Cougars added to their lead in the sixth inning on a two-run homer from Marissa Allen to put Minnesota Morris up by a score of 10-5.

After RBIs from Shelby Schermerhorn and Becca Holland, Megan Knickerbocker tallied a two-run home run to cap off a five-run seventh inning to secure the 15-5 win for the Cougars.

Freshman Grace Penke took over on the mound in the third inning and allowed just three hits and struck out three in five innings to capture the win.

Minnesota Morris got on the board in the bottom of the third inning as Kallie Wycoff hit a triple to score Lacey Sullivan and then Madison Langrehr brought home Wycoff on a single to the pitcher.

The Cougars added their final three runs of the game in the next inning to take a 5-0 lead. In the fourth inning, Jordan Boldt singled to shortstop to score Emily Nordquist and then three batters later, Langrehr doubled to right center to score Sullivan and Boldt.

Langrehr picked up the win as she allowed two hits and struck out one in two innings. Mollie Dummer pitched the final five innings of the second game as she struck out five, allowed no hits and just gave up one walk.

Game Three Recap
After not scoring in the opening inning of the third game, the Cougars scored in each of the final four innings en route to a 11-0 victory. On the mound, Penke struck out a pair in four shutout innings.

In the third inning, Allen scored on a throwing error for the lone run of the inning.

A two-run home run from Knickerbocker along with an RBI single from Mann gave the Cougars a 7-0 lead after four innings.

The fifth inning saw the Cougars score four runs on a pair of singles and a fielder’s choice, which included a two-run single from Mahoney.