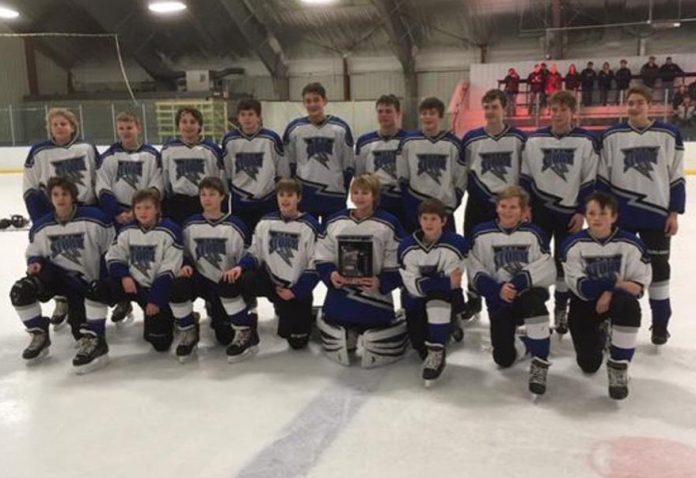 PLYMOUTH – The Morris/Benson Area Storm Bantams lost 7-1 to Osseo-Maple Lake in the consolation bracket of the class B state hockey tournament on Saturday, March 16th, ending their season.

Ryan Tolifson scored the lone goal for the Storm, who’s season ends with a record of 24-17-3.

On Friday the Storm lost to Cambridge-Isanti 4-2 in the opening round of the tournament. The game was tied 2-2 when Cambridge-Isanti scored with 59 seconds left in regulation, then added an empty-netter.

Sam Thompson and Ryan Tolifson scored the goals for the Storm.

ALEXANDRIA – At the class B West Region Tournament from the Runestone Community Center in Alexandria the Storm opened play with a 4-2 win over Crookston.

In the west region semifinals, Brett Hansen scored with just 33 seconds left in overtime and the Storm defeatd St. Michael-Albertville 3-2.

Cole Blume scored both of the other goals for MBA as they took a 2-0 lead into the third period before St Michael Albertville scored twice to send the game into overtime.

In the final frame it was Cole Blume and Breuer scoring, and goalie Christopher Danielson held held off St Cloud Red to earn a 5-3 win and punch their ticket to the state tournament.