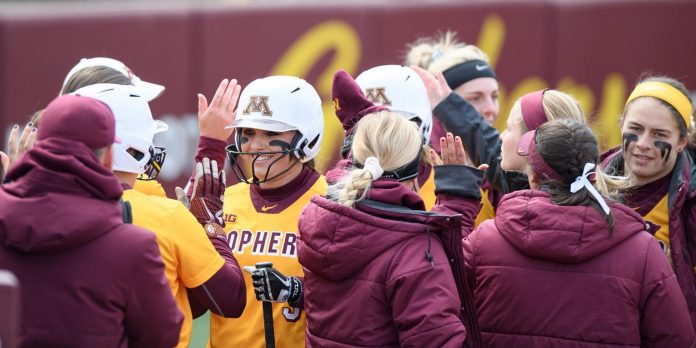 BASEBALL
MINNEAPOLIS – A wild pitch scored pinch-runner Riley Smith in the bottom of the ninth to give the Gopher Baseball team a 3-2 win over Nebraska to split a doubleheader and take 2-of-3 in the teams’ Big Ten Conference series at Siebert Field on Sunday. The Cornhuskers picked up a 10-1 victory in game one of the doubleheader.

Minnesota (11-14, 4-1 Big Ten) walked off as winners in each of their victories over Nebraska (13-9, 4-2 Big Ten) on the weekend. Jordan Kozicky went 3-for-6 and drove in all three RBIs for the Gophers on the afternoon.

Nebraska 10, Minnesota 1
Nebraska dominated game one, scoring three runs in the opening inning and never looking back, tacking on multiple runs in the fourth, seventh, and ninth innings for an eventual 10-1 win.

Patrick Fredrickson (1-3) worked the first 3.2 innings for Minnesota, but could not get out of the fourth, eventually surrendering six runs, including five earned, on five hits and three walks. He collected six strikeouts on the day.

Kozicky’s fourth home run of the season in the fifth inning was the only mark on the day for Huskers southpaw Nate Fisher (4-1). The lefty tossed 8.0 innings, scattering four hits while striking out six on the day.

Ryan Duffy gave the Gophers 2.0 innings of shutout work from the bullpen, collecting four strikeouts. Eli Wilson, Max Meyer, and Zack Raabe each added a hit in the game for the Gophers.

Minnesota 3, Nebraska 2
Wilson led off the bottom of the ninth inning with a walk before Meyer sacrificed him to second with a bunt. Smith pinch-ran for Wilson at second, moving to third on a strikeout passed ball that saw Easton Bertrand reach first base. After an intentional walk to Kozicky, Cole McDevitt stood in for a pinch-hitting appearance for the Maroon & Gold when a wild pitch brought home Smith for the game-winning run.

Nebraska took advantage of three-straight two-out hits to plate a pair of runs in the top of the first inning, but the Gophers answered with three singles of their own, with Kozicky punching home a Ben Mezzenga and Wilson to tie the game at 2-2 in the bottom of the first.

Brett Schulze (4-0) picked up the last out of the ninth with a strikeout giving the Gophers the chance to rally against Huskers reliever Shay Schanaman (1-1).

SOFTBALL
The No. 15 University of Minnesota Gophers swept their second Big Ten series in a row with 5-1 and 8-2 victories over Purdue this afternoon.

The Gophers played a doubleheader after postponing Saturday’s game due to cold temperatures. Minnesota improves to 25-9 overall and 6-0 in the Big Ten.

In two games today, Hope Brandner went 4-4 for with three walks, three RBIs, one double and two solo shot home runs. Brandner hit .833 with a slugging percentage of 2.000 and an on base percentage of .900 over the weekend.

Minnesota will head to the University of Illinois next weekend for another three game series. Game one is set for Friday at 5:00 p.m. CT. All three games will be available on BTN Plus.

Game 1: Minnesota 5, Purdue 1
Purdue jumped out to a 1-0 lead in the top of the first after plating a run on a double. It would be the only run Sydney Smith would allow all game in the circle.

The Gophers placed doubles in the first and second innings with two outs on the board in an effort to tie the game, but were unable to do anything with them. The tying run came in the bottom of the fourth by way of Brandner’s first home run of the day.

Purdue loaded the bases in the top of the fifth but Smith was able to work her way out of trouble and the Gophers bats caught fire in the bottom of the frame.

With two outs on the board, Natalie DenHartog smacked a single to drive in Maddie Houlihan and MaKenna Partain to make it 3-1 in favor of the Gophers. Taylor Chell stepped up right after and cleared the bases with a shot to left for the final two runs of the game.

Smith retired Purdue’s last six batters in order in the final two innings. The senior pitched her fifth complete game of the season with seven strikeouts and only issued two walks. She improves to 8-3 overall with a 2.26 ERA.

Game 2: Minnesota 8, Purdue 2
Brandner opened up the game by smashing her ninth home run of the season, and second of the day, on the first pitch to give the Gophers an early 1-0 lead.

Minnesota extended their lead to 3-0 in the third on a Purdue throwing error that sent Macy Gill and Houlihan across the plate.

Brandner’s punched Partain across for another run in the bottom of the fourth with an RBI single to give the Gophers a 4-0 edge.

Purdue pulled within two with a strong fifth inning. They scored two runs on a double to left center with two outs on the board and threatened to plate more but Amber Fiser was able to strikeout the the last batter to close out the frame.

Other than the fifth inning blemish, Fiser was dominant yet again. The junior ace matched her career high with 13 strikeouts in the win. She has 159 strikeouts on the season.

The Maroon and Gold answered back in the bottom of the fifth with strong base running from Ali Lindner. The freshman came in to pinch run for Chell and scooted to second on a sacrifice bunt and to third on a passed ball. She scored as she charged home on a Katelyn Kemmetmueller bunt.

DenHartog’s team leading 11th home run of the season gave the Gophers an 8-2 lead in the bottom of the sixth. The Hopkins, Minn. native crushed the ball to center to put a cherry on top of her strong weekend. She went 4-7 with five RBIs, one double and one home run. She hit .600 on the weekend with a 1.000 slugging percentage.

Fiser went all seven innings and moves to 15-6 after the victory. 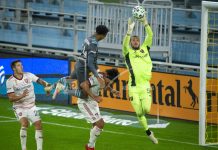