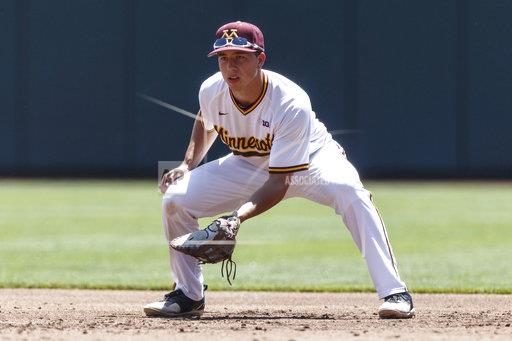 MINNEAPOLIS – The Gopher Baseball team took advantage of a shaky Illinois bullpen to take game three of the teams’ Big Ten Conference series with a 5-4 victory at Siebert Field on Monday afternoon.

Trailing 4-1 after the seventh inning stretch, Minnesota (14-18, 6-5 Big Ten) scored two runs in each of the seventh and eighth innings to edge out the Illini. Quinten Sefcik made his second appearance of the weekend for Illinois (22-11, 3-5 Big Ten), surrendering two runs on three Gopher hits in the inning. Ben Mezzenga led off the seventh with a single, and came around to score on a pinch-hit RBI single by Drew Hmielewski. Cole McDevitt ripped his third double of the series to bring home Hmielewski with two outs.

Nathan Lavender (1-2) walked the bases loaded in the bottom of the eighth and then hit Eli Wilson with a pitch to pull Minnesota even. Zack Raabe scored on an RBI groundout by Hmielewski to take the 5-4 lead and Brett Schulze shut the door in a perfect ninth inning for his fifth save of the season.

Nick Lackney (1-3) earned the victory, throwing 3.2 scoreless innings in relief of Joshua Culliver. The right-hander worked into the fifth for Minnesota, surrendering four earned on six hits while striking out three on the day. Wilson singled in the third, coming around to score on an RBI groundout by Jordan Kozicky to give the Gophers their first run of the day.

Illinois had a 2-0 lead in the first after RBI singles by Cam McDonald and Jack Yalowitz, and stretched the lead to 4-1 in the fifth, chasing Culliver with Zac Taylor’s second home run of the series.