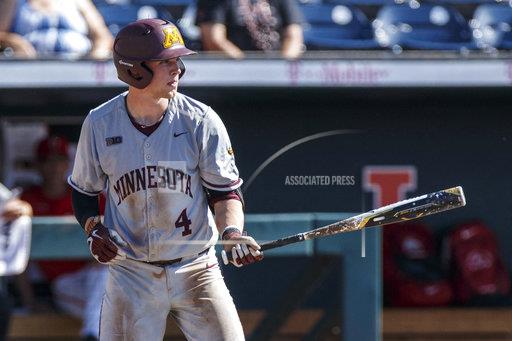 BASEBALL
MINNEAPOLIS – The Gopher Baseball team opened its non-conference series against Oklahoma with a dominating pitching performance, defeating the Sooners 8-1 at Siebert Field.

Jack Wassel launched a three-run home run in the bottom of the first to give Minnesota (17-18) a 4-0 lead after the opening frame. Eli Wilson grounded an RBI single through the left side of the infield earlier in the inning.

Sam Thoresen (2-3) did not allow a hit until the third inning, working around the first single of the day for Oklahoma (23-16) to finish with 5.0 innings pitched, striking out six while allowing just two total hits. Jake Stevenson allowed a run in the top of the ninth to surrender the shutout, but finished with 4.0 strong innings pitched, allowing three strikeouts while striking out one for his first save of the year.

The Maroon & Gold took advantage of a pair of Oklahoma errors in the fifth, and Wilson slugged an RBI double down the left field line to add an exclamation point to a three-run inning against reliever Ryan Madden. Riley Smith lifted his first home run of the season in the eighth to tack on insurance for the Gophers.

SOFTBALL
LINCOLN – The No. 18/12 University of Minnesota Gophers topped Nebraska 3-0 in the opening game of the series.

Fiser matched her career-high 13 strikeouts for the fourth time this season in her 25th start of the year.

In seven innings, the junior ace only gave up six runs and four walks. She improves to 19-6 on the season.

The Gophers drew four walks in the top of the second, to load the bases, which resulted in the team walking in a run to give themselves an early 1-0 lead.

Minnesota looked to score again in the top of the fourth. Emily Hansen recorded her first career hit to help load the bases for the Gophers. Minnesota put up two attempts to get the runners home, but were thrown out at the plate both times.

The Maroon and Gold added their final two runs of the game in the top of the sixth. A double from Carlie Brandt and back-to-back walks from MaKenna Partain and Maddie Houlihan loaded the bases. Hope Brandner punched Brandt across the plate and a sacrifice fly from Natalie DenHartog brought in Partain to make it 3-0.

The Huskers put runners on the corners in the bottom of the seventh and threatened to score with two outs on the board. Fiser was able to get the Gophers out of the jam by striking out the next batter to close out the game.