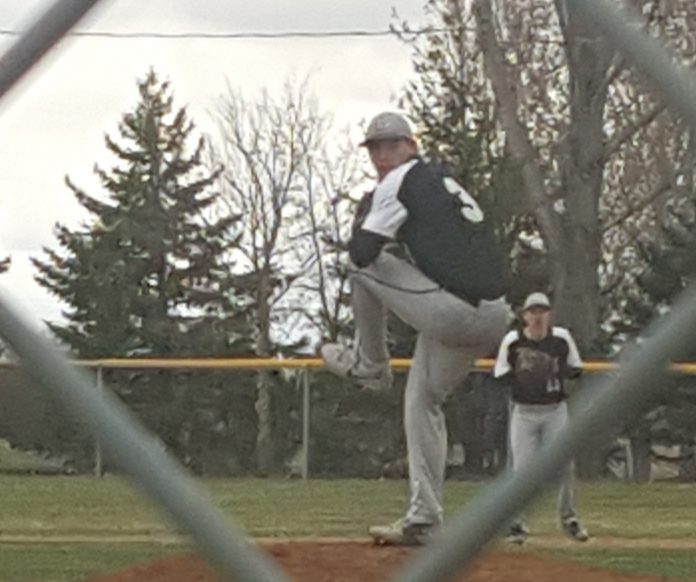 Border West 4, West Central Area 1
WHEATON – Sam Adelman outdueled Teigen Moritz and the Border West Bucs remained undefeated with a 4-1 win over West Central Area on Monday in Wheaton.
Adelman dominated on the hill, tossing 6.2 innings, giving up a run on two hits and striking out ten for the win. He retired the side in order five times, and is now 3-0 on the season, having allowed a single run over 20.2 innings.
At the plate Adelman added an RBI double to deep left field that tied the game at one in the fourth. Matt Thielen went 2-3 with a double, RBI, and run scored while notching the save after Adelman was pulled due to pitch count.
Nate Moberg added two hits for the Bucs who are 4-0 on the season.
Mortiz threw three hitless innings before the Buc broke through in the fourth, then broke away with a three-run fifth. He takes the loss, pitching five innings, allowing four runs (three earned) on five hits.
Grant Beuckens RBI single in the third scored Kaleb Getz for the Knights who fall to 2-4.

Clinton-Graceville-Beardsley 9, West Central Area 8
GRACEVILLE – An eight-run third inning burst by Clinton-Graceville-Beardsley proved just enough in a 9-8 win over West Central Area.
Trailing by five, the Knights began to chip away and pulled within a run, but were held scoreless over their final two at-bats.
Lora Botker tossed a complete game for the win, giving up eight runs (four earned) on six hits, walking eight and striking out eight.
Mataiah Turner led the Wolverines at the plate by going 3-4 with two RBI’s and a run, Jessica Moberg drove in two, and Hayley Ward was 2-3 with an RBI and two runs.
For the Knights, Hailey Hansen went 3-4 with an RBI and run, Hailey Bennett was 2-4 with three RBI’s and a run but suffered the loss in the circle.
CGB is now 4-4 on the year while West Central Area falls to 4-3.