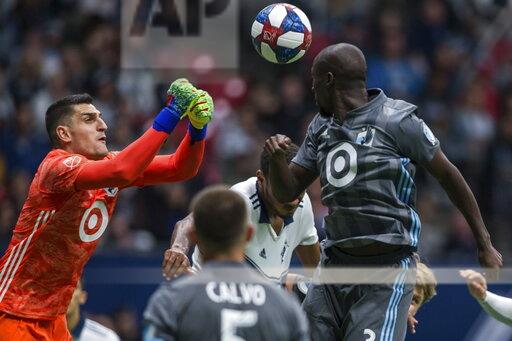 Minnesota’s Ike Opara cleared an entry that Roldan first-timed from well outside the area to make it 1-1 in the 41st minute. Defender Romain Métanire stumbled as he tried to stop the Seattle attack on the left side, setting up a cross that Opara headed directly to Roldan. He blasted a bending right-footer past the outstretched arms of diving goalkeeper Vito Mannone and just inside the post.

Opara opened the scoring for United in the 26th. Jan Gregus played a free kick from 30 yards out to the far post where Opara leaped to head home a side-netter.

Minnesota (4-3-3) is unbeaten in its last three games, conceding just one goal. Seattle (5-1-4) is winless in its last four games after a six-match unbeaten streak, including five wins, to open the season.