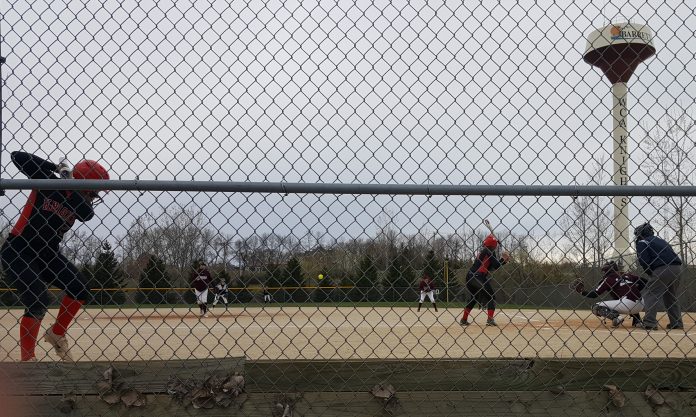 Morris Area/Chokio-Alberta 6, New London-Spicer 5
MORRIS – Morris Area/Chokio-Alberta built up a big lead early and held on late for a 6-5 win over New London-Spicer from Chizek Field on Monday.
Zach Bruns was 2-3 with two RBI’s and a run, Jaret Johnson, Mike Halvorson, and Chandler Wilts each knocked in a run, with Johnson earning the win on the hill working six innings, Bruns notched the save.

Border West 2, Ortonville 0
ORTONVILLE – Matt Thielen tossed a complete game one hitter and Border West edged Ortonville 2-0.
Thielen struck out 10 and walked just two, making sure two early runs by the Bucs held up as they improve to 7-1 on the season.

West Central Area 15, Hancock 0 (4 Inn)
BARRETT – Hailey Bennett tossed a four inning no-hitter, striking out 12 and West Central Area routed Hancock 15-0 in game one of a doubleheader.
The Owls failed to put a ball in play, with their only base runners getting on by walk and hit-by-pitch.
Bennett added two hits with an RBI and run at the plate, Hailey Hansen was 2-3 with two RBI’s, Ellie Herman tripled in a run for the Knights who had 13 hits in all.

West Central Area 6, Hancock 2
BARRETT – Hancock was two outs away from earning a split before West Central Area rallied and put together a five-run fifth inning, and held on for a 6-2 victory to earn the sweep.
Morgan Kisgen’s two-out RBI hit in the bottom of the fourth gave the Owls a 2-1 lead, and Carlee Hanson was two outs away from a complete game victory when the Knights strung together five hits with two walks and scored five in the fifth, taking a 6-2 lead.
Ireland Winter allowed two runs on two hits over four innings for the win, and added the go ahead two-run single in the fifth. Lexi Bright was 2-3 with a triple and two runs, Shelby Gilsdorf had two hits and an RBI for the Knights who are 7-4.
Hanson took the loss, giving up six runs on eight hits for the Owls who fall to 3-7.

Brandon-Evansville 16, Wheaton/Herman-Norcross 1
WHEATON – Brandon-Evansville erupted for 20 hits while Mikenna Pattrin surrendered just one to Wheaton/Herman-Norcross in a 16-1 rout from Wheaton.
Pattrin gave up an unearned run while striking out five for the win. Pattrin along with Kristen Kokett, Alena Shores, and Korrie Randt each had three hits.
Shores and Randt each had three RBI’s, Pattrin knocked in two while scoring four times, and Kokett scored three runs as the Chargers improve to 8-2.

Clinton-Graceville-Beardsley 11, Hillcrest Lutheran 1
GRACEVILLE – Clinton-Graceville-Beardsley scored early and often in a 11-1 rout of Hillcrest in game one of a doubleheader on Monday.
Lora Botker tossed five innings for the win, giving up a run on three hits, while driving in four runs at the plate on two hits.
Emma Botker was 3-4 with three RBI’s and a run, Mataiah Turner had two hits and three runs, Reanna Ward had two hits, two RBI’s, and Hayley Ward was 3-3.

Hillcrest Lutheran 10, Clinton-Graceville-Beardsley 7
GRACEVILLE – Hillcrest scored seven unearned runs on seven Wolverines errors to earn a split with a 10-7 win in game two.
CGB rallied with a four-run sixth inning to tie the game at seven, but the Comets answered with three in the bottom half and held on from their.
Reanna Ward was 3-4 with two RBI’s, Hayley Ward had two hits and two RBI’s. Lora Botker allowed seven runs (one earned) and took the loss as CGB fell to 5-7.
Maddie Heiser and Naomi Ferenczy each had three RBI’s for the Comets.