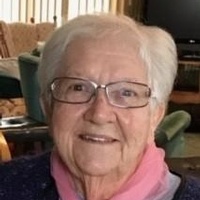 Edna Mae Groneberg, age 88 of Herman, Minnesota, passed away Saturday, May 18, 2019, at the Traverse Care Center in Wheaton, Minnesota.

Visitation for Edna Groneberg will be held Thursday, May 23, 2019, from 6 until 7:00 p.m. with a 7:00 p.m. Prayer Service and Time of Sharing Service at the Bainbridge Funeral Home in Wheaton, MN. Visitation will continue Friday afternoon one hour prior to service time at the Herman Community Center.

Funeral services for Edna Mae Groneberg will be held Friday, May 24, 2019, at 2:30 p.m. at the Herman Community Center in Herman, MN, with Pastor Tim Shekleton officiating. Burial will be in Lakeside Cemetery, rural Herman.

Edna Mae (Davis) Groneberg was born April 12, 1931, in rural Norcross, Minnesota, the daughter of Clarence and Edna (nee Brunkow) Davis. Edna Mae grew up on a farm North of Norcross, attended a one-room country school and then graduated from Herman High School in 1949. She met Robert “Bob” Groneberg while roller skating in Norcross. Bob proposed at a Harlem Globetrotters game later that year and they were united in marriage March 11, 1950. The couple farmed in the Wheaton area and were active in the Monson Lutheran church community. In 1962 they bought their own farm and moved with their four children to the Herman area. They added two more daughters to complete the family. The couple enjoyed farm life with many relatives and neighbors nearby.

Edna Mae and Bob loved fishing, including some very memorable and adventurous trips to Canada for “the big ones”. They also enjoyed many excursions throughout the continent in their RV, with frequent stops in the state of Nevada…not sure what was going on there! Edna was known for always feeding a houseful. She was a self-taught baker and gardener who even won the Purple Grand Champion ribbon at the Grant County Fair one year. She was involved with her kids’ school, 4-H and church activities. When not in the kitchen or working in the fields, she helped out whenever there was a neighbor in need. Edna Mae was a member of Bethlehem Lutheran Church and very active in the Ladies Aid and LWML. She was also a member of the Herman-Norcross Legion Auxiliary and the Red Hats Society. When Edna had a few moments of down time, she could be found working a crossword puzzle, playing cards or watching her favorite Minnesota Twins and Vikings!

After retiring to town, Edna Mae’s greatest joys were visits from her grandchildren and other friends & relatives, hosting parties in her home, meeting the ladies for morning coffee, and making sure she mailed greetings and gifts to everyone on her calendar. Her personal hand-written letters will be missed. Edna Mae had a lifetime interest for learning and enjoyed reading biography, history & political books, as well as an occasional novel.

Edna Mae was preceded in death by her husband Robert; her parents; and brothers: Stanley (Dorothy) Davis; Lloyd Davis; and Claire Davis.

Funeral arrangements for with the Bainbridge Funeral Home of Herman, MN.