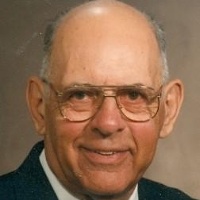 Olen Lupkes, age 100 of Wheaton, Minnesota, passed away Saturday, May 25, 2019, at Sanford Hospital in Wheaton.

Visitation for Olen Lupkes will be held Tuesday, June 11, 2019, one hour prior to service time at Bethlehem Covenant Church in Wheaton, MN.

Interment will be in Wildwood Cemetery, Wheaton, Minnesota.

Olen was born March 28, 1919, to Oscar O. Lupkes and Martha Barkhoff Lupkes on a farm near Grundy Center, IA. He attended elementary school for several years in Dike, IA.

In 1928 Olen, his parents and older brother, Fred moved to a farm in Lake Valley Township, east of Wheaton, MN. He completed his eighth grade education at Traverse County Rural School District 39. After he completed his schooling, he worked on his father’s and neighbor’s farms. It was at this time farming was changing from horse pulled power to tractors and other mechanized equipment. Olen became interested in and skilled at repair of this new technology.

In 1942 he began working for the Wheaton Creamery driving a truck on a cream route for several years. It was during this time that he began offering rides to a young teacher named Maxine walking towards her rural school house along a country road on his route.

In 1946 he began working at the Traverse Motor Sales (Ford Dealership) as a mechanic. In 1951 he attended the Bear Wheel Alignment School in Rock Island, Illinois. He then worked exclusively in the wheel alignment department at Traverse Motor Sales, Wheeler’s Texaco Station and C&P Sales until he retired in 1981.

The meeting with the young teacher along his cream route blossomed into a deep and long relationship. Olen and Maxine Louise Dalziel were married in the First Presbyterian Church at Wheaton, MN, on October 12, 1946. They were married for 73 years and both lived for over 100 years. Maxine died February 9, 2019.

In 1949 Olen and Maxine purchased a lot on the northwest edge of Wheaton and Olen built their home on this property. They lived in the home until 2013 when they moved to Prairie View Center in Wheaton.

Olen and Maxine spent 22 winters in Edinburgh, Texas. They traveled to most of the 50 states, Canada and Mexico. During their return from Texas in the spring of 1990, Maxine and Olen survived the powerful Hesston, Kansas tornado. Forced by authorities to seek shelter in a roadside restaurant, they escaped personal injury but the restaurant, their pickup and travel trailer were completely destroyed.

Olen enjoyed hunting pheasants and ducks. He was an excellent marksman, winning several shooting contests. He loved to fish in the summer and winter.
Olen was a member, elder, deacon of the First Presbyterian Church in Wheaton, MN, until its closure and then a member of Bethlehem Covenant Church.

He was preceded in death by his parents, wife: Maxine; brother: Fred U. Lupkes; and sister-in-law: Velva; sister and brothers-in-law: Dick and Beth (Dalziel) Gebhart and Jerome and Shirley (Dalziel) Bickel.