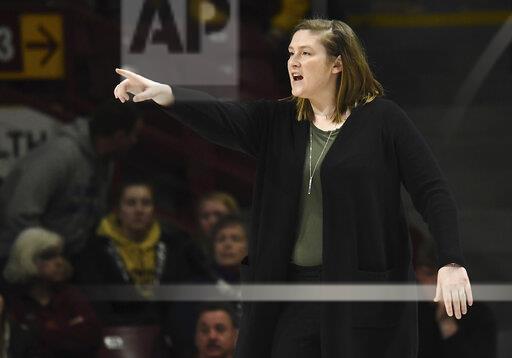 MINNEAPOLIS – Minnesota women’s basketball has announced that Kadiatou Sissoko (kah-DGEE-tau sis-OH-co), a former five-star recruit who spent her freshman season at Syracuse, will transfer in to the Golden Gophers’ program.

A 6-2 forward from Paris, France, Sissoko will have to sit out the 2019-20 season due to NCAA transfer rules, but will then have three have years of eligibility remaining.

“Kadi brings a great level of versatility that we are extremely excited about,” Minnesota head coach Lindsay Whalen said. “Her size at her position, as well as being able to play multiple positions, is a strength that only adds to our roster. We are thrilled to welcome Kadi to our Gopher family.”

The 10th-ranked player overall and the No. 2 guard in the 2018 recruiting class according to ESPN, Sissoko will be the highest ranked recruit to play for Minnesota in at least the last 12 years (ESPN archives date back to 2007). Previously, Rachel Banham was the highest-ranked recruit when she was tabbed No. 19 in 2011.

Sissoko played in 22 games with one start for Syracuse this past season. She averaged 3.2 points and 1.8 rebounds while playing 9.6 minutes per contest, and missed eight games early in the year due to a minor knee procedure, including the contest between Minnesota and the Orange that was part of the ACC/Big Ten Challenge on Nov. 29.

Among her freshman-year highlights, Sissoko started against Miami on Jan. 23, recording five rebounds and three points, tallied a career-high nine points versus Pitt on Feb. 21 and grabbed a career-best six rebounds at Florida State on Feb. 28.

On the international level, Sissoko, out of Lycee Marcelin Berthelot in Saint-Maur-des-Fosses, helped France to a sixth-place finish at the 2018 FIBA U20 European Women’s Championship in Sopron, Hungary, as she averaged 9.1 points and 6.6 rebounds in seven games and shot 42.6 percent from the field.

She also was a member of the U18 French National Team in 2017, posting 7.3 points and 4.1 rebounds per game as France finished fifth.

Sissoko will be the 16th international player to ever suit up for the Gophers and the first from France. In addition, she will be one of seven newcomers for the Gophers in the 2019-20 season, joining fellow transfer Maryia Adashchyk and a five-member freshman class.