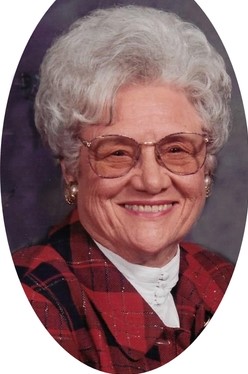 Funeral service for Irene Rachel Carl will be at 1:30 p.m. Saturday, July 6th at First Congregational Church in Appleton, MN, with Pastor Herbert Rotunda officiating. Burial will be in the Appleton City Cemetery.

Irene married Chester Carl on August 26, 1938, at Milbank, SD.  This union was blessed with 69 years together and three children: Patricia, Joan, and Chester II.  The couple started to farm together on the family farm.  In 1949, they purchased the present farm northwest of Correll, MN, where Irene lived until she entered the Care Center.

She enjoyed cooking and baking for family and friends and always entertained family for the Holidays.  Irene especially loved to make treats for her grandchildren.  She also liked to garden and was known for keeping a well-groomed yard.  Irene was a long-time member of the First Congregational Church in Appleton, MN, where she served on the Women’s Fellowship and enjoyed participating in the Bazaars and suppers.

She was preceded in death by her husband: Chester “Chet” Carl in 2007; her parents: Bernard and Hazel Hill; her son: Chester Carl II; her grandson: Charles “Chip” Korstjens; son-in-law: George Korstjens; two brothers and one sister.