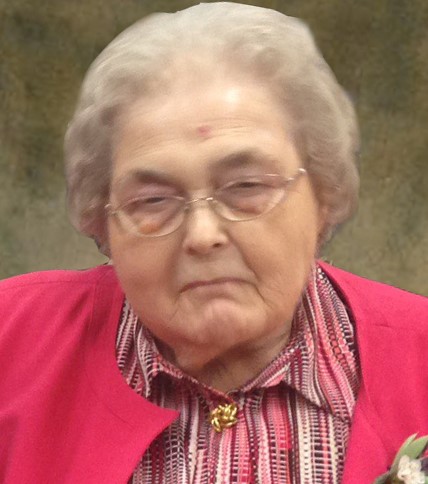 Visitation for Janet Shirley Hacker will be on Wednesday, July 17, 2019, from 5:00 p.m. until 8:00 p.m. at the Pedersen Funeral Home in Morris, MN, and for one hour prior to the services at the church on Thursday.

Funeral services for Janet “Ma Hacker” Hacker will be held on Thursday, July 18, 2019, at 10:00 a.m. at the Good Shepherd Lutheran Church in Morris, MN, with Pastor Becky Worner officiating.  Burial will be in West Zion Lutheran Cemetery, rural Hancock.

Janet Shirley Torkelson was born on August 9, 1934, to Joseph and Sophie (Kleveland) Torkelson in Hardy, Iowa. Janet was raised in the Rutland, IA, area where she was baptized, confirmed, and received her education. While living in Livermore, IA, Janet met Donald Hacker while at a neighbors. The two began dating and were united in marriage on November 3, 1951, in Rutland, IA. The couple made their home near Bradgate, IA, where they started their family – welcoming eleven children! In 1964, the family moved near Hancock, MN, and purchased a farm. Janet stayed home, caring for the house and their children until she started working outside the home as a Home Health Aide for Stevens County Public Health where she was employed for over 25 years.  In 2015, Janet and Donald moved into Skyview Court in Morris, before entering the West Wind Village in the spring of 2018.

Janet was a member of Shalom Community Lutheran Church in Starbuck, MN.  In earlier years, she was a member of West Zion Lutheran Church and was very active in the Ladies Aide.  Janet enjoyed baking, especially bread and rolls, and cooking – she knew how to feed a large crowd!  Janet liked to play BINGO and loved talking on the phone to her friends and family.

She was preceded in death by her parents; the love of her life and husband of 67 years: Donald; one granddaughter: Michele Serbus; one great-granddaughter: Hennessy Hacker; one sister: Lois Johnson and one brother: John Torkelson.

Arrangements are with the Pedersen Funeral Home in Morris, MN.