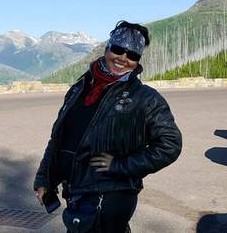 Funeral service for Doreen Mae Touhey will be held Tuesday, August 13, 2019, at 10:00 a.m. at the Bethel Baptist Church in Kerkhoven, MN. Interment will be in Lake Hazel Cemetery, rural Benson.

Doreen Mae Touhey was born on November 11, 1954, in Melrose, Minnesota, the daughter of Elner Joseph and Delores Ione (Swenson) Strom. She was baptized on November 27, 1954, at 1st Lutheran Church in Elbow Lake, MN. She grew up in Barrett, MN, and attended Barrett High school and Wadena Tech.

On June 22, 1974, Doreen was united in marriage to Michael Brian Touhey at St. Charles Catholic Church in Herman, MN. They were blessed with 45 years of marriage. Doreen worked for 37 years at Golden Living Nursing Home in Benson. Doreen enjoyed her weekly Bible study sessions. She loved tending to her flowers, riding motorcycle, and spending time with her grandkids and family. She also enjoyed trips to Iowa to visit dear friends. She always looked forward to her cycle trips out west with her husband and close friends. (But not without her lipstick.)

She was preceded in death by her parents: Elner and Deloris Strom; father-in-law: Duane Touhey; and many aunts and uncles.

Arrangements are with Zniewski Funeral Home in Benson, MN.