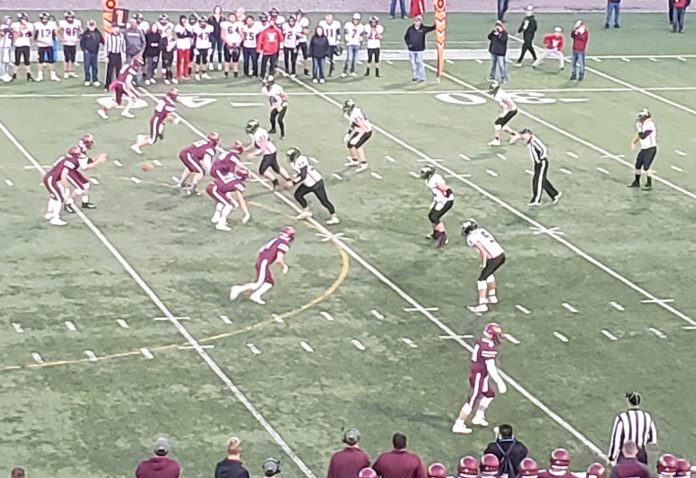 Morris Area/Chokio-Alberta 14, Montevideo 12
MONTEVIDEO – Zach Bruns made his season debut after returning from an injury, racking up over 200 yards of total offense and two touchdowns to lead Morris Area/Chokio-Alberta past Montevideo 14-12.
Bruns was 14-23 passing for 159 yards with scoring strikes to Kenny Soderberg and Jackson Loge. Bruns ran for another 42 yards on 12 carries.
Loge hauled in a 10 yard touchdown to open the scoring in the first quarter, while Soderberg added to the Tigers lead with a 22 yard strike from Bruns. Soderberg caught five passes for 74 yards on the night.
The Thunder Hawks would get on the board before halftime and add another in the fourth, but the two-point conversion failed and the Tigers held on for the win. The Tigers are now 2-1 on the season, Montevideo falls to 0-3.

Hancock 34, Wheaton/Herman-Norcross 23
MORRIS – In a game that featured eight turnovers, five lead changes, and a season’s worth of drama, Hancock survived for a 34-23 victory over Wheaton/Herman-Norcross from Big Cat Stadium.
15 of the Warriors 23 points came off Owls turnovers, including a 51 yard pick-six by Hunter Blume. Blume grabbed his second pick when the Owls had the ball in the red zone, returning it all the way to the Owls 20, which led to a five yard touchdown run from Gunner Martinek.
Despite the turnovers, the Owls offense was nearly unstoppable, moving the ball by air and ground. Preston Rohloff finished 8-17 for 148 yards and three touchdowns, Tyler Timmerman ran for 134 yards and two scores on 27 carries, while also catching three passes for 65 and a touchdown.
Daniel Milander’s 38 yard touchdown reception in the fourth quarter gave Hancock some breathing room and the defense took over from there, keeping the Warriors out of the end zone on three separate trips to the red zone.
Zach Braaten was 8-16 for 148 yards with two interceptions, both by Brandon Kellenberger, Connor Zych had 82 yards receiving on two catches. John Hasbargen and Drew Bainbridge combined for 14 tackles and two sacks for the Warriors who are 1-2, the Owls are now 3-0.

Minnewaska Area 33, Atwater-Cosmos-Grove City 12
GROVE CITY – Tyson Meyer ran for 188 yards and two touchdowns to lead Minnewaska past ACGC 33-12.
Peyton Johnsrud caught a touchdown from Grant Jensen for the Lakers who remain unbeaten at 3-0 despite giving up 200 yards on the ground to the Falcons.
Josh Kinzler ran for 127 yards on 27 carries for ACGC, but they couldn’t overcome the 19-0 deficit they faced going into the second half, falling to 2-1.

Brandon-Evansville 42, Bertha-Hewitt 0
EVANSVILLE – Brandon-Evansville racked up 474 yards of total offense in a 42-0 rout of Bertha-Hewitt.
Keagan Schiele had a career night throwing for 243 yards and three touchdowns and running for another.
Cade Carlson ran for 99 yard and a touchdown, Tanner Bitzan caught four passes for 83 yards and a score, Tony Schaffrin added 70 yards receiving with a 44 yard touchdown.
Bitzan added 11 tackles on defense for the Chargers who are 3-0, the Bears fell to 0-3.