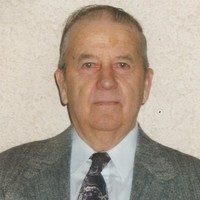 Visitation for Donald Ward will be held Saturday, October 5, 2019, at 9:00 a.m. at the Wilmot Lutheran Church in Wilmot, South Dakota.

Funeral Services for Donald Jay Ward will be held Saturday, October 5, 2019, at 10:00 a.m. at the Wilmot Lutheran Church in Wilmot, South Dakota, with Rev. Sheila Pohl officiating. Organist will be Ember Dady with special music by Denny Dobbs and Jill Spindler.

Donald was born ninety-one years ago on November 23, 1927, in Roberts County, South Dakota to Samuel L. Ward and Edna J. Crooks.  Born at home with a doctor present, he joined a family of one brother, Lewis, and two sisters, Cecile and Arlene.
Growing up he always liked going to church every Sunday, which was held in the schoolhouse.
School was held in a one room-country schoolhouse with grades first through eighth. They walked two and a half miles to get to school. At the end of eighth grade, he quit school to help with the family farming.
When Donnie was 20, he met Delores Larsen at a family outing. They dated for two years and were married on November 27, 1949. In the next nine years they became parents to Sandy, Randy, Rob, and Sheryl. Not only did they all work side by side on the farm, but they also found time to play ball and other games.
Donnie farmed until 1980 partnering with his brother Lewis. Then they moved to Browns Valley where Donnie was a bus driver, a gas truck driver, worked for Duffield Oil and later for Hansen Chevrolet until 2000.
Donnie and Delores enjoyed helping others. They volunteered to drive for Meals on Wheels, at the food shelter, and playing cards at the Nursing Home. Donnie often drove others to various appointments. They also loved to dance. He loved being an usher at their church in Wilmot. After retirement he enjoyed fishing with his sons, playing cards, and working in his yard.
His favorite trip was a bus trip he and Delores took to the New England States. He said it was a wonderful feeling seeing the Statue of Liberty and Staten Island.
His greatest happiness was time spent with his family. Besides, his four children there are thirteen grandchildren and twenty-four great grandchildren with one more on the way.  Family get-togethers meant lots of food, chatter, playing cards inside and playing games outside.   So many happy memories were made during these times.
Some think being rich is having lots of money, but we feel our dad was one of the richest people we know because he had faith in God, love, happiness, was a very kind and giving person, and thought of others before himself.

Donald is survived by his beloved wife of sixty-nine years: Delores Ward of Browns Valley, MN; four children: Sandra (Frank) Guilmette of North Charleston, S.C., Randy (Claudia) Ward of Clinton, MN, Rob Ward of Milbank, SD, and Sheryl (Tom) Foster of Brandon, SD; thirteen grandchildren who adore and respect him plus twenty-four great grandchildren with one more on the way. Donnie is also survived by one sister: Arlene Dobbs.
Extending their hands to welcome him into heaven are one great grandson: Lynx Gross; one daughter-in-law: Marlene Ward; and many extended family members and friends.