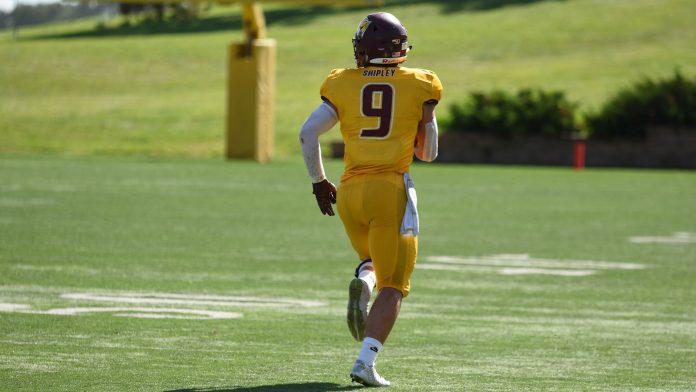 The Tigers connected on a 65-yard touchdown pass from Leo Alvarez to Austin McBeth to take a 6-0 lead with 4:18 left in the first quarter.

With 1:01 to go in the first half, the IWU scored on a 29-yard interception and then the Tigers converted the two-point attempt to make it 14-0.

The Cougars got on the board with 10:29 left in the third quarter, as Daniel Francis found Cameron Geyer for an 11-yard touchdown pass.

After UMN Morris scored, Alvarez found Jacob Santos for a four-yard touchdown pass to bring the lead back to 14 points with 8:22 left in the third quarter.

UMN Morris then rattled off 21-straight points to secure the 28-21 victory over the Tigers.

Francis connected on his second touchdown pass of the afternoon as he found Mark Chapman for an 11-yard score with 6:21 to play in the third.

Trailing 21-14 midway through the fourth quarter, Francis found Zach Steen on a trick play for seven yards to tie the game at 21-all with 7:47 to play in regulation.

Senior linebacker Drew Shipley put the Cougars in front, 28-21, with 2:51 to play on a 21-yard fumble recovery for a touchdown.

NOTABLES
Francis went 23-for-46 for 209 yards and three touchdowns.

UMN Morris was 3-of-6 on fourth down.

HOW IT HAPPENED – St. Scholastica
The Saints brought the first set within one point at 10-9, but the Cougars used a 9-2 run to build their lead to 19-11 and then ended up taking the opening set, 25-19.

The second set saw the Cougars jump out to a 6-2 lead and they never looked back en route to a 25-16 victory.

The two teams went back-and-forth in the third set as the two squads held a lead late. The Cougars had chances to win at 24-23 and at 25-24, but they ultimately finished off the sweep with a 27-25 win.
NOTABLES

Mia Frick recorded a season-best in kills (15) and blocks (five).

Alyssa Ukestad had 17 digs to pace the Cougars.

The third set saw the Cougars pick up a 25-20 win over the Oles.

UMN Morris led 13-11 over the Oles in the fifth set, but was unable to secure the final two points as St. Olaf scored four-straight points to take the fifth set and the 3-2 win over Minnesota Morris.
NOTABLES

Brenna Tinjum had 20 kills to lead both teams.

HOW IT HAPPENED
Emily Olson scored the lone goal of the game to put the Saints in front, 1-0, at 24:26.
Bernadette Cienik made six saves for the Cougars.
Megan Ellingboe, Hajaysen Kwateh, Sam Tate each tallied a shot attempt.

The Cougars were outshot by St. Scholastica, 20-3.

MORRIS – The Minnesota Morris women’s soccer team (2-4-0) notched a 1-0 win over Finlandia (6-3-1) on a cold and windy Sunday afternoon at Cougar Field. Freshman Harper Toward netted her first career goal in the victory.

The two teams went into halftime with the score tied at 0-0 and shot attempts knotted at 4-4. The tie game didn’t last long in the second half, as Toward found the back of the net just 40 seconds into the second stanza for the 1-0 lead.

The Cougars outshot the Lions, 11-9. Bernadette Cienik recorded four saves for the Cougars.

Junior Sam Tate picked up an assist on the goal, which is her second assist of the year.

HOW IT HAPPENED
Nolan Friday headed home a loose ball in the 13th minute for his third goal of the season to make it 1-0 in favor of the Saints.

Lucas Harmon made eight saves for the Cougars.

Payton Sierra tallied a season-best score of 88 (+17) to tie for third.

Shelby Maloney finished seventh with a score of 91 (+19).

HOW IT HAPPENED
The Cougars did not tally an overall team score, as they shot a day one score of 401 (+45).