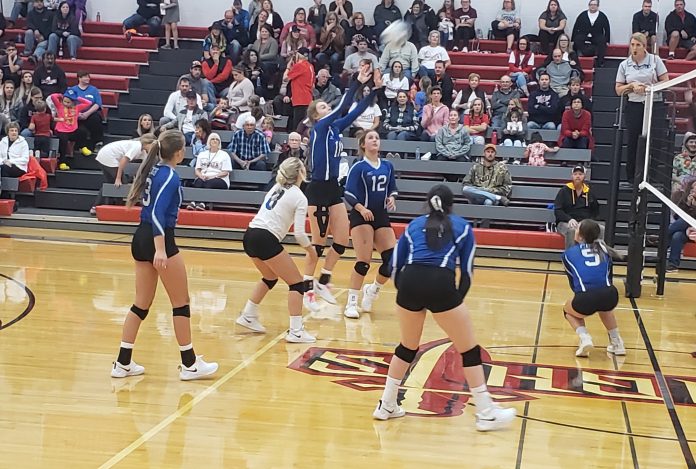 Melrose 3, Morris Area/Chokio-Alberta 1
MELROSE – Morris Area/Chokio-Alberta battle back late, but it wasn’t enough as they fell to Melrose in four sets on Tuesday 16-25, 19-25, 25-14, 21-25.
The Tigers defense had a big night, but the offense couldn’t back it up, getting 22 digs from Courtney Lehman, 19 digs from Macee Libbesmeier, 14 digs with six kills from Lexi Pew, 12 digs from Jaden Ross, and 19 assists by LaRae Kramm. With the loss the Tigers fall to 7-8, the Dutchmen are 10-4.

Clinton-Graceville-Beardsley 3, West Central Area 0
BARRETT – CGB rallied back from a 24-20 deficit to steal the first set from West Central Area 27-25, and used that momentum to earn a sweep of the Knights 27-25, 25-14, 25-18, extending their Pheasant Conference winning streak to 22 matches.
Reanna Ward and Lora Botker provided the offense for the Wolverines with 12 kills each, Jessica Moberg had 20 assists, Kylie Lick added 13 digs.
Mataiah Turner filled the stat sheet with 10 digs, seven kills, and a pair of aces. It was Turner’s serving that saved the Wolverines in set one, and she continued to cause problems for the Knights throughout.
Liz Rustan had eight kills for the Knights, Kaylin Ulrich added 10 digs, Hailey Bennett and Kaleigh Anderson each tallied eight assists.

Brandon-Evansville 3, Rothsay 1
ROTHSAY – Brandon-Evansville showed their resiliency and bounced back from a first set loss to earn a four set victory over Rothsay 24-26, 25-17, 25-17, 25-20.
Korrie Randt had 26 assists for the Chargers, Mikenna Pattrin had 10 kills, Bailey Schaefer added nine with eight digs, Kristen Kokett had 13 digs, and Kailee Klimek tallied 11 more.

The Gators won three events as a team, with Jaida Hess taking first in one meter diving, Elizabeth Murken in the 100 backstroke, and the 400 Free Relay team of Shannon Daugherty, Bailey Schoen, Makenna Hufford, and Hannah Hoffmann.

The Tiger girls were the runner-up with 73 points, Minnewaska took first with a score of 59. Meredith Carrington ran to a fourth place finish, Hailey Werk was sixth, and Kaylie Raths finished 17th. Caroline Kuehne of LPGE took first, Sydney Bauer for the Lakers was fifth.

Following Stewart on the boys side, Bradley Rohloff was 17th and Thomas Tiernan took 21st. Mason Tank was the top Minnewaska finisher in 26th place, the Lakers were 10th as a team.