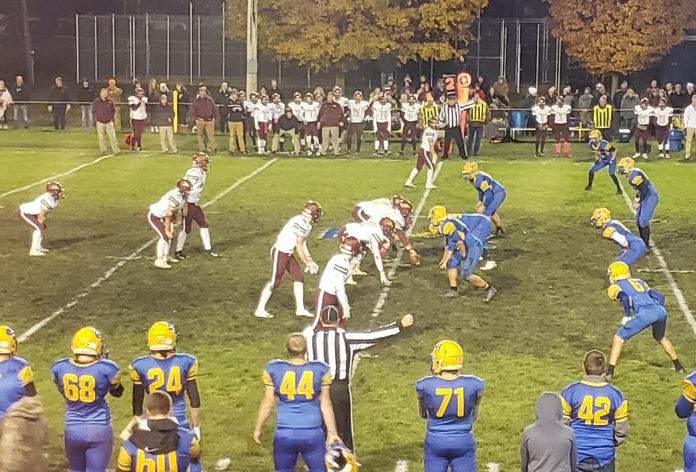 Morris Area/Chokio-Alberta 36, Sauk Centre 14
MORRIS – Morris Area/Chokio-Alberta fell behind 6-0 early before Kenny Soderberg sparked the team with a pair of electric touchdowns, and the Tigers pulled away for a 36-14 victory over Sauk Centre.
Soderberg tied the game with a 52-yard punt return touchdown, following that up with a 37-yard touchdown reception.
Jackson Loge caught a 13-yard touchdown, and Zach Bruns finished 7-11 passing for 83 yards and two touchdowns, he ran for 63 and a score on the ground. The Tigers end the season 5-3 while dropping the Mainstreeters to 0-8.

Hancock 16, Brandon-Evansville 6
BRANDON – In a battle of 7-0 teams, the Hancock Owls earned a 16-6 defeat of Brandon-Evansville, and with it the District 9-West (South) title.
It took the Chargers 90 seconds to take a 6-0 lead on Marshall Riedel’s 17-yard touchdown run. That was the last time the Chargers would score.
The Owls defense shutdown the Chargers for the remainder of the game, while the offense began to click, tying the game on a fourth-and-goal two-yard touchdown pass from Preston Rohloff to Luke Joos. Rohloff’s two-point conversion to Daniel Milander gave the Owls an 8-6 halftime lead.
On the second play of the second half, the Rohloff hit Brandon Kellenberger for a 49-yard touchdown, and Hancock took a 16-6 lead.
Rohloff finished with 139 yards passing, Tyler Timmerman ran for 150 yards on 25 carries as the Owls finish the year at 8-0 and with the no. 1 seed in the section playoffs.
Riedel ran for 136 yards, but the Chargers suffer their first loss falling to 7-1.

Osakis 31, Minnewaska Area 21
OSAKIS – Osakis won a back-n-forth battle Minnewaska 31-21 behind 116 yards rushing and two touchdowns from Luke Imdieke.
The Lakers led 14-6 at halftime, but the Silverstreaks answered with 16 unanswered third quartr points and held off the Lakers as the teams traded scores from there.
Grant Jensen tossed two touchdowns for the Lakers while running for another. Minnewaska though falls to 6-2, the Silverstreaks are also 6-2.

Clinton-Graceville-Beardsley 34, Hillcrest Lutheran 13
FERGUS FALLS – Alex Sigler’s 60-yard touchdown run in the second quarter gave Clinton-Graceville-Beardsley a lead they never gave up in a 34-13 victory over Hillcrest.
It was Sigler’s first of two touchdown runs for the Wolverines, Chuck Kleindl ran for two touchdowns and Nate Moberg sealed the win with a late 22-yard scoring run. CGB finished the regular season with a record of 2-6, the Comets fall to 0-8.

Wheaton/Herman-Norcross 34, Ortonville 28 (OT)
WHEATON – Zach Braaten scored on a QB keeper in overtime to give Wheaton/Herman-Norcross a thrilling 34-28 victory over Ortonville.
The Trojans rallied in the fourth quarter with a pair of touchdowns to tie the game at 28 and send it to overtime. The Warriors end the regular season with a record of 5-3. The Trojans are 3-5.