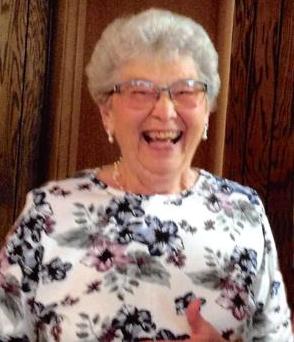 Memorial services for Vivian Jean Graff will be at 1 p.m. on Thursday, Oct. 24th at First Lutheran Church in Litchfield, MN.

Vivian Jean Graff, daughter of Henry and Frances (Chapman) Sperr, was born Dec. 1, 1935, in Donnelly, MN. She grew up in that area and graduated from Morris High School in 1953. She continued her education at Moorhead State for teacher’s training. She taught for two years in Morris, MN, from 1955 to 1957.

On June 15, 1957, she was united in marriage to Harvey Graff in Herman, MN. They made their home in Morris, MN, until they moved to Atwater, MN, in 1959. They then moved to Willmar, MN, in 1966 where she worked for JCPenney. They retired in 1998 and moved to Litchfield, MN. Vivian was an active member of First Lutheran Church singing in the choir and attending Bible study. She enjoyed camping, church and spending time with her family.

She was preceded in death by her parents; sister: Annie Hamblin; brothers-in-law: Roy Tribe and Arven (Joanne) Graff; and sister-in-law: Evelyn Graff.