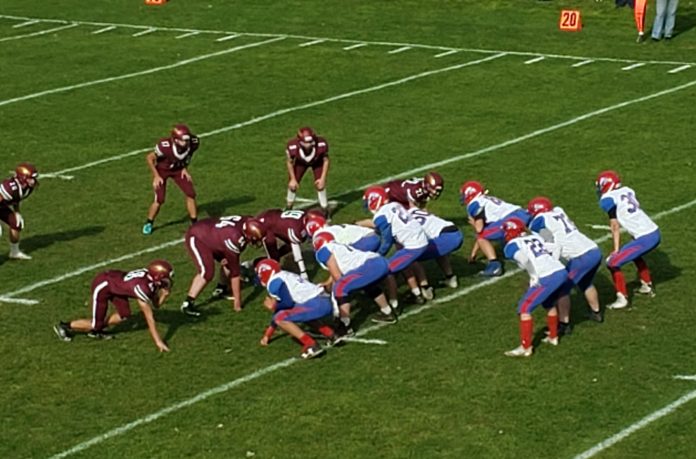 (2) Eden Valley-Watkins 40, (3) Morris Area/Chokio-Alberta 21
NEW LONDON – Eden Valley-Watkins forced five Tigers turnovers on their way to a 41-20 defeat of Morris Area/Chokio-Alberta on Saturday.
The Eagles raced out to a 20-0 first quarter lead, and led 33-0 by halftime in a rout.
The Tigers got on the board when Zach Bruns hit Kenny Soderberg for a 15-yard touchdown pass in the third. Bruns then hit Jack Riley for a 58-yard scoring strike in the fourth but that’s as close as they would get.
Bruns finished 10-29 for 168 yards and two scores, Durgin Decker ran for 73 yards on 13 carries as the Tigers season ends with a record of 6-4.
Luke Jansen threw three touchdowns for the Eagles on 16-22 passing for 168 yards. Josh Streit caught five passes, two for touchdowns, and 68 yards as the Eagles improve to 6-3 and advance to the section championship.

(1) Hancock 47, (5) Bertha-Hewitt 32
HANCOCK – Hancock thrashed Bertha-Hewitt for 40 points in the game’s first 12:30, and never left a doubt in a 47-32 victory that puts the Owls into the section title game.
Preston Rohloff threw three first quarter touchdowns, with two going to Daniel Milander and another to Tyler Timmerman on a 52-yard strike. Rohloff finished with 6-7 passing for 163 yards.
Dalton Rose and Isaac Nienhaus each ran for touchdowns, and the Hancock defense forced four turnovers on the day with three interceptions. The Owls are now 10-0 on the season.

(2) Brandon-Evansville 34, (3) Verndale 8
BRANDON – Cade Carlson ran for three touchdowns and Brandon-Evansville slayed a dragon by earning their first ever win over Verndale, punching their ticket to the section championship.
It took the Chargers just three plays to go 77 yards on their opening drive that ended with Carlson’s first score of the day. The Pirates answered with a touchdown by Jake Ismil to tie the game at eight, but it was all Chargers from their.
Marshall Riedel added two rushing touchdowns for the Chargers who are 9-1 and earn a rematch with Hancock, their lone blemish on the season.
The Chargers racked up 473 yards of offense, with Carlson running for 201 yards on 20 carries, Riedel added 96 on the ground.
The Chargers and Owls will play at 12:30 on Friday, Nov. 1st at the Fargodome.

(2) Pierz 48, (3) Minnewaska Area 0
PIERZ – Minnewaska was limited to just 117 yards of offense as their season came to an end with a 48-0 loss to Pierz on Saturday.
Pierz ran for 292 yards and Matthias Algarin scored twice as the Pioneers improved to 10-0, advancing to the section championship.