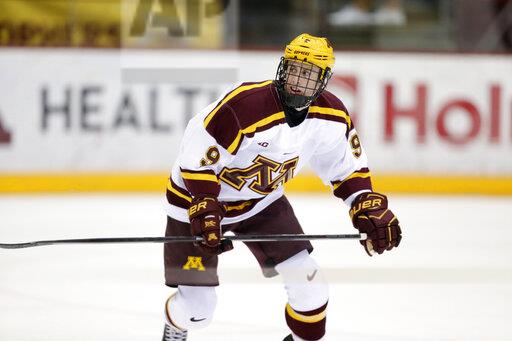 Along with her 19 kills, Pittman hit .484, had five blocks and three aces in the win. Alexis Hart followed with 10 kills, while Taylor Morgan added seven. Bayley McMenimen had 37 assists, while Stephanie Samedy had a team-best 11 digs.

WOMEN’S HOCKEY
COLUMBUS — Grace Zumwinkle, Amy Potomak, and Taylor Heise scored goals to lead the Maroon & Gold as the No. 2 University of Minnesota women’s hockey team earned a series split with a 4-2 win over No. 9 Ohio State on the road at OSU Ice Rink on Saturday afternoon.
Minnesota (9-1-0, 5-1-0-0 WCHA) trailed after one period but scored four-straight goals on the way to the 4-2 win. The Gophers took their first lead of the series with a pair of second-period goals from Zumwinkle and Potomak before Zumwinkle and Heise found the back of the net in the third period to extend the Gophers’ lead and seal the victory. Sydney Scobee finished with 25 saves in the win.
Ohio State (5-3-2, 3-3-2-0 WCHA) received 33 saves from goaltender Andrea Braendli along with a first-period goal from Jenn Gardiner and a late tally from Liz Schepers in the series split.

COLUMBUS — On Friday the Gophers fell to the Buckeyes by a score of 4-3 at OSU Ice Rink. The loss marked the first of the season for the Golden Gophers.
Minnesota was led by Grace Zumwinkle’s two-goal effort and Emily Brown’s two assists, and Emily Oden also scored for the Maroon & Gold while Sydney Scobee made 27 saves. The Gophers had a 36-31 advantage in shots on goal and went one-for-three on the power play while killing off the team’s lone penalty in the game.
Ohio State received two goals from Liz Schepers, including the first goal of the game just 1:55 into the opening period and the eventual game-winner when she broke a 3-3 tie with 7:56 remaining. Andrea Braendli made 33 saves.

MEN’S HOCKEY
MINNEAPOLIS – Sammy Walker and Ben Meyers teamed up for a pair of goals, but it wasn’t enough as the No. 20 Gopher men’s hockey program dropped a 5-2 decision to No. 8 Minnesota Duluth on Friday night at 3M Arena at Mariucci.
Minnesota surrendered three unanswered goals to the two-time defending national champions to open the game before Meyers put the Maroon & Gold on the board in the final seconds of the second period. The freshman’s first career goal was set up by Walker and Jackson LaCombe.
The duo of Walker and Meyers paired up again in the opening minutes of the third period, this time with Meyers and Blake McLaughlin feeding Walker for his fourth goal of the season to bring the Gophers within one.
But the Bulldogs (2-3-0, 0-0-0-0 NCHC) answered back with two more goals to lock up the win in the series opener.
Minnesota was outshot 25-20 in the loss while going 0-for-2 on the power play and 1-for-3 on the penalty kill. Jack LaFontaine (1-2-0) suffered the loss for the Maroon & Gold, making 19 saves. Justen Close came on for the final minutes of regulation, making one save in his first collegiate appearance.

DULUTH, Minn. – For the first time in nearly two years, the Gopher men’s hockey program was held without a goal on Saturday night, falling 2-0 to Minnesota Duluth at AMSOIL Arena.
The shutout loss was the first by the Maroon & Gold in 23 months and two days – dating back to Nov. 24, 2017 in a 1-0 loss at Notre Dame. Coincidentally, the Irish are next up for the Gophers as Big Ten play begins next weekend with a two-game series at 3M Arena at Mariucci.
Jared Moe (2-1-0) suffered his first loss with Minnesota although the freshman stood out as the program’s top player in the series finale. After surrendering a goal on Minnesota Duluth’s first shot on goal of the night, Moe proceeded to stop 21-straight attempts and also backstopped the Gophers to a 4-for-4 performance on the penalty kill. The Bulldogs added an empty-net goal in the final minute to quash any chance of a rally by the Maroon & Gold.
Minnesota (3-3-0 overall, 0-0-0-0 Big Ten) was outshot 23-21 in the contest while the Gophers were 0-for-2 on the power play.
Minnesota Duluth (3-3-0, 0-0-0-0 NCHC) tallied goals from Quinn Olson and Jackson Cates. Hunter Shepard made 21 saves on 21 shots for the shutout.