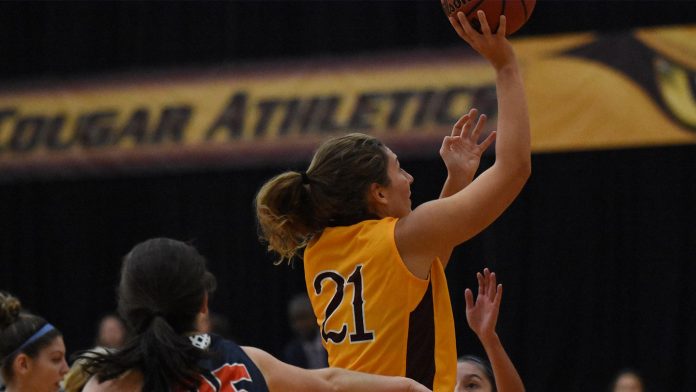 The second quarter saw Mayville State outscore UMN Morris by a margin of 21-8 to take a 41-29 lead into halftime.
During the second quarter, Wassink scored six of the team’s eight points. With 58 seconds to go in the first half, she scored on a layup to tally 1,000 career points.

The Cougars weren’t able to gain any ground on the Comets in the third quarter as the two teams scored 11 points apiece.
In the fourth quarter, Mayville State pulled away by outscoring the Cougars 22-4 en route to the 74-44 victory.

Wassink, a transfer, had 893 career points heading into the season, finishing the night with 18 points, five rebounds and one block. Lexus Eagle Chasing led the Cougars in rebounds with six.

UP NEXT
The Cougars open up UMAC play on Saturday, Dec. 7, at 3:45 p.m. against Northland at the Cougar Sports Center.

The Cougars were able to tie the game twice down the stretch, but were never able to take the lead. Following a Dillon Haider free throw to make it 76-75 in favor of the Comets with 1:19 to play, Mayville State closed out the game with a 5-0 run.

Along with his career-best 23 points, Johnson tallied six rebounds, two assists, one block and one steal.

UP NEXT
The Cougars open up UMAC play on Saturday, Dec. 7, at 2 p.m. against Northland at the Cougar Sports Center.