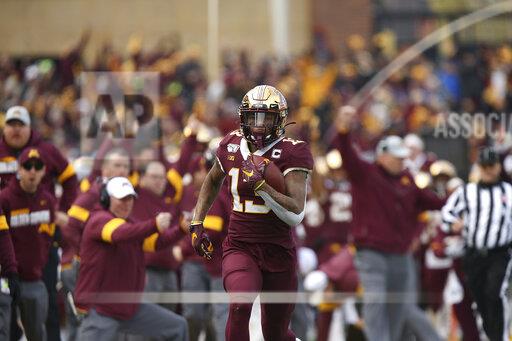 Minnesota led by as many as 18 points late in the second quarter only to see the Irish fight back to take a 59-58 lead with 4:50 to play in the game. The Golden Gophers responded, though, with a 15-2 run to put the game away and improve to 3-0 all-time in the series between the teams.

Redshirt junior Gadiva Hubbard led all scorers as she matched a season high with 20 points, including six 3-pointers that matched a career best. As a team, the Gophers made 12 from beyond the arc, the most ever under head coach Lindsay Whalen.

Senior Taiye Bello continued her double-double run with 16 points and a season-high 16 rebounds (10 on the defensive end). It was her fifth double-double of the season and the 20th of her career. She also showcased her defense with five blocks.

Notre Dame’s Anaya Peoples made a layup with 4:50 to play to give the Irish a 59-58 lead, but Hubbard knocked down a 3-pointer and scored on a layup to kickstart a 7-0 Minnesota run. The Fighting Irish got within 65-61 but Hubbard and Pitts made 3-pointers on back-to-back possessions to extend the lead to 10 points with just 2:31 to play.

Up Next
Minnesota continues its stretch of games away from home as they spend this coming weekend in Washington D.C. The Gophers will play at American University Sunday afternoon before facing George Washington Tuesday night.

FOOTBALL
INDIANAPOLIS – It was another banner day for the University of Minnesota football team, as nine offensive players received postseason honors from the Big Ten.

Leading the way was sophomore receiver Rashod Bateman who was named the Big Ten’s Richter-Howard Receiver of the Year. Bateman is the first Gopher in school history to be named the best reciver in the conference.

Bateman was joined on the All-Big First Team by senior teammate Tyler Johnson, who was also named to the First Team last season. This year is believed to be the first time in conference history that one school has occupied both receiver spots on the First Team ballots by the coaches and media.

Blaise Andries, who has started games at left tackle, left guard and right tackle this year, was named All-Big Ten Third Team to become the first Gopher offensive lineman to be honored by the conference since 2016. Offensive linemen Curtis Dunlap Jr., Daniel Faalele, Conner Olson and Sam Schlueter were all named All-Big Ten Honorable Mention by the coaches and media.

Defensive back Antoine Winfield Jr. was named the Tatum-Woodson Defensive Back of the Year, becoming the first Gopher to ever receive the honor. Minnesota’s last student-athlete to receive and individual Big Ten award was Emmit Carpenter, who was named the Bakken-Andersen Kicker of the Year in 2016.

Rush end Carter Coughlin was named All-Big Ten Second Team by both the coaches and media.

WOMEN’S HOCKEY
MINNEAPOLIS — Senior Sarah Potomak is the WCHA Forward of the Month and senior Sydney Scobee has been selected as the WCHA Goaltender of the Month Week as the Golden Gopher women’s hockey team went undefeated at 5-0-3 during the month of November.

The award marks Potomak’s fifth WCHA monthly award of her career. The Aldergrove, British Columbia native led the WCHA with eight goals, 1.00 goals per game, three game-winning goals, and one shorthanded goal during November; she was tied for second in the league with 14 points in eight games and a +10 rating. Potomak had at least one point in seven of Minnesota’s eight games, including five multi-point games. She is Minnesota’s active career scoring leader; she ended the month tied for 14th in Gophers’ history with 158 career points (59g-99a), having logged her 150th career point in Minnesota’s sweep over Bemidji State.

Scobee earned her first WCHA Goaltender of the Month nod of her career. She led WCHA goaltenders with a 1.45 goals against average, .945 save percentage, two shutouts, and 494:56 total minutes played during the month of November. Scobee also ranked second in the league with 206 total saves and 218 total shots faced. The Minnetrista, Minn., native picked up two WCHA Goaltender of the Week awards during the month, after Minnesota took four of six WCHA league points from Wisconsin and again after combining for 48 saves on 50 shots faced as Minnesota tied Boston College 2-2 in overtime and defeated Harvard 4-0 at the Country Classic. She is tied for the NCAA lead with four shutouts on the season.