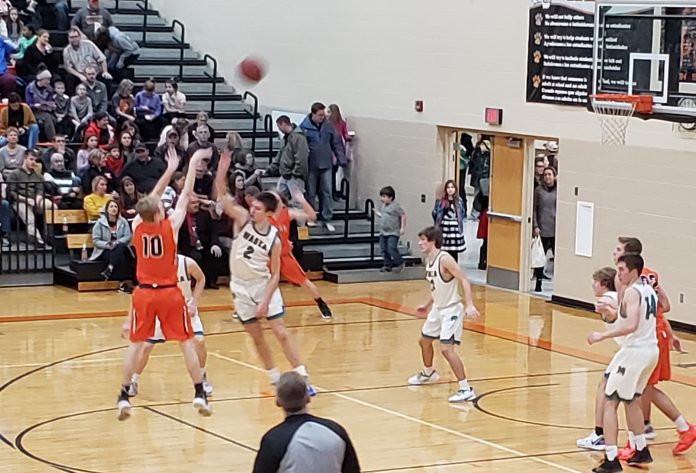 Minnewaska Area 57, Morris Area/Chokio-Alberta 43
MORRIS – Grant Jensen scored 22 points with five rebounds to lead Minnewaska past Morris Area/Chokio-Alberta 57-43 on Thursday from the Tiger Center.
The Lakers took their first lead when they went ahead 12-10 and never trailed again, leading by as much as 21. Aaron Ver Steeg had 13 points with eight boards, Peyton Johnsrud added 11 points for Minnewaska who is 2-0.
Jackson Loge led the Tigers with 13 points, eight rebounds, and three blocks but was held scoreless in the second half while the Tigers struggled to hit outside shots, allowing the Lakers clog the lanes and slow the big man.
Durgin Decker had six points while Cam Koebernick and Brandon Jergenson each added five for the Tigers who are 0-1.

West Central Area 87, Battle Lake 47
BARRETT – West Central Area shot 57 percent from the floor on their way to yet another decisive victory, this time 87-47 over Battle Lake.
Jack Van Kempen filled the stat sheet while posting a double/double with 12 points, 14 rebounds, five assists, four steals, and two blocks.
Grant Beuckens had a game-high 20 points, Gage Staples added 19 with six rebounds, and Jacob Bright chipped in 12 points, five assists, and four steals.
The Knights forced 26 turnovers while holding the Battlers to 34 percent shooting, they’re now 2-0 on the season. Drew Johnson scored 18 for the Battlers who fall to 0-2.