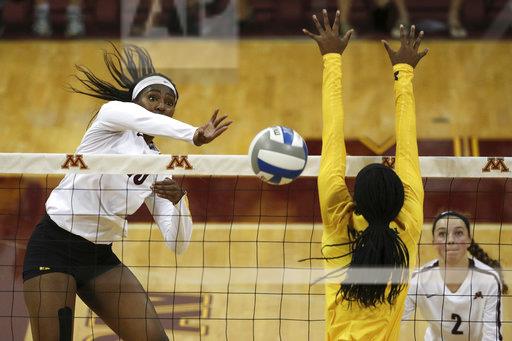 VOLLEYBALL
MINNEAPOLIS – The University of Minnesota volleyball team kicked off its postseason with a commanding sweep over Fairfield on Friday at Maturi Pavilion. The Gophers finished the evening with set wins of 25-13, 25-14 and 25-11 over the Stags.

It was the first-ever meeting between Minnesota and Fairfield, and the home team advances to face Creighton on Saturday. The Gophers are 5-0 all-time against the Bluejays.

Adanna Rollins led Minnesota with 14 kills on the night and also added four blocks. Alexis Hart and Taylor Morgan were not far behind with nine and eight kills each, and the trio all hit over .500 in the match. The Gophers blocked the Stags 10-0, with Morgan putting up a team-high five. Kylie Miller posted a double-double performance with 39 sets and 11 digs. Minnesota registered three aces in the match: Two from CC McGraw and one from Regan Pittman.

Minnesota had 40 total kills and hit .434 on the match, with only four errors. The Golden Gophers held the Stags to just 22 kills as they hit -.038 in the match.

The Gophers face Creighton in the second round at 8:00 on Saturday night.

MEN’S HOCKEY
COLUMBUS, Ohio – It took nearly 65 minutes to find a winner in a back-and-forth Big Ten battle between Minnesota and No. 7/8 Ohio State, but it was the Buckeyes who came out on top with a 3-2 overtime win on Friday night at Value City Arena.

Minnesota (5-9-3 overall, 2-4-3-2 Big Ten) rallied from a first period deficit behind a pair of power-play goals from Robbie Stucker at 18:25 of the second period (assisted by Sammy Walker and Ben Meyers) and Sampo Ranta at 1:43 of the third period (assisted by Ryan Johnson and Tyler Nanne).

Minnesota outshot Ohio State 27-26 in the contest while the Gophers went 2-for-3 on the power play and 3-for-3 on the penalty kill. Jack LaFontaine suffered the loss with 23 saves to fall to 2-5-2 on the year while Tommy Nappier improved to 8-4-1 with 25 saves for the Buckeyes.