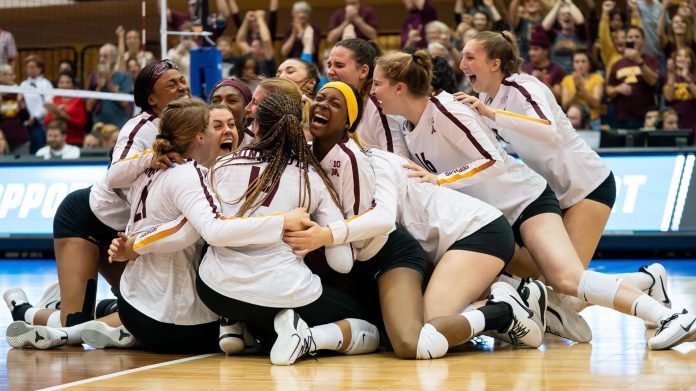 VOLLEYBALL
The University of Minnesota volleyball team punched their ticket to the NCAA Championship with a 3-0 sweep over Louisville, tonight in Austin, Texas. The Golden Gophers (27-5) are making their third Final Four appearance in five years and sixth in program history.

Adanna Rollins was named the Most Outstanding Player, while Alexis Hart and Kylie Miller each were named to the all-tournament team. Rollins had 12 kills tonight, hit .379, had nine digs, three blocks and an ace. Hart and Stephanie Samedy each had nine kills in the match, while Taylor Morgan had five kills, hit .417 and six blocks. Regan Pittman also had six blocks and an ace. Miller posted 28 assists, eight digs and four blocks. Rachel Kilkelly added a team-best 13 digs

On how the team played overall: “I thought it felt for the most part pretty good,” McCutcheon said. “I thought offensively and defensively, we were feeling balanced. We got a fair share of blocks tonight, and we were digging at a pretty good rate. I thought our serve was really the key to the game, and that seemed to be a strengths of ours all weekend, and offensively we got production from a lot of different people, and that’s also been something that’s been fairly consistent for us.”

Up Next
Minnesota will play Stanford on Thursday, Dec. 19 in Pittsburgh at the PPG Paints Arena. Wisconsin and Baylor round out the rest of the Final Four teams.

With a crowd of 4,673 on hand to see the Gophers raise Janel McCarville’s banner to the rafters in a pregame ceremony, Minnesota improved to 9-1 on the year to tie for the fourth best start through 10 games in program history. In addition, it’s tied for the fifth best one-loss start in program annals.

Hubbard and Pitts’ performances marked the third time this year that Minnesota had multiple players each go for 20 points, and it was the second time the duo did it together.

Hubbard scored a season-high 24 points thanks to 4-of-7 shooting from 3-point range and 6-of-8 shooting at the free throw line. It was her highest scoring outing since going for 25 points against Penn State in Feb. of 2018. Hubbard, who scored the Gophers’ first seven points of the game and had 14 at intermission, also had five rebounds, two assists and a steal.

Pitts had her team-leading fourth game this year with at least 20 points as she finished with 22 and a season-high nine rebounds. She was a perfect 9-of-9 at the free throw line, the most makes without a miss by a Gopher this year. Pitts made three 3-pointers to push her career total to 201 and into fifth on the team’s all-time list.

Senior Taiye Bello just missed out on her seventh double-double of the year as she posted 17 points and nine rebounds. She’s now matched Amanda Zahui B. for seventh on the Gophers’ career rebounding list with 820.

UC Davis scored the final seven points of the first quarter to lead 18-17 after the first 10 minutes. The Gophers responded, though, in the second quarter by outscoring the Aggies, 23-13.

Tied at 23-23 with 7:37 to play in the half, Minnesota embarked on an immediate 10-3 run and an extended 17-8 stretch to close out the first half. After Hubbard scored 10 points in the opening quarter, Pitts followed with 10 of her own in the second. They combined for 27 first-half points as Minnesota led 40-31 at the break.

Minnesota held a double-digit lead for most of the third quarter, including its largest advantage of 15 after a Bello free throw made it 46-31 with 8:29 to play. Minnesota led by 11 through three at 58-47, but UC Davis started to chip away in the fourth quarter.

The lead was 11 again for Minnesota with 2:43 to go, but the Aggies scored 12 of the next 13 points to trail by only four with 31 seconds to go. Pitts made a pair of free throws to push the lead to six, grabbed a defensive rebound on the other end after a missed Aggies 3-pointer and then made two more free throws to put the game away.

Up next, Minnesota closes out the non-conference portion of its schedule on Saturday as the Gophers host Lehigh at 12 p.m.