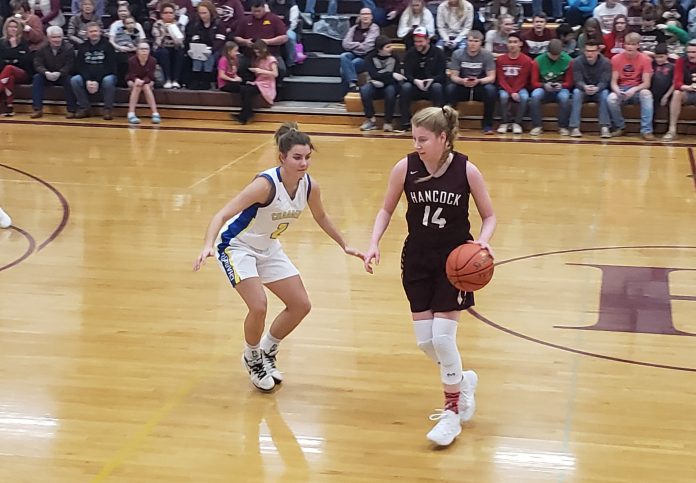 Morris Area/Chokio-Alberta 47, Montevideo 25
MORRIS – Emma Bowman had 15 points with four steals to lead Morris Area/Chokio-Alberta to a 47-25 defeat of Montevideo on Tuesday.
The Tigers shot 42 percent from the floor and racked up 15 steals on the night. Meredith Carrington had 10 points with five assists, Malory Anderson pulled down eight rebounds while scoring six points. Kendra Wevley added six points, six boards, Kenna Kehoe scored six for the Tigers who are 3-4.

Hancock 62, Brandon-Evansville 34
HANCOCK – Hancock remains unbeaten after an impressive conference victory over Brandon-Evansville 62-34.
Nine Owls scored led by Rylee Hanson who had 13 with eight rebounds. Hancock shot 52 percent as a team and held the Chargers to just 22 percent shooting.
Morgan Kisgen finished with 11 points, Lexi Staples added nine while Jordan Hausman and Carlee Hanson each had seven, Tori Pahl chipped in six with nine boards for the Owls who are 7-0 on the season.
Mikenna Pattrin posted a double/double for the Chargers with 14 points, 11 rebounds, Bailey Schaefer added 10 points in the loss as they fall to 6-3.

Morris Area/Chokio-Alberta 74, New London-Spicer 47
NEW LONDON – Jackson Loge scored 44 points with 15 rebounds and Morris Area/Chokio-Alberta shot 60 percent from the field in a 74-47 rout of New London-Spicer.
Loge was 18-22 shooting, Toby Gonnerman added nine points on 4-4 shooting, Durgin Decker chipped in seven for the Tigers who are 1-3 on the season.

Detroit Lakes 8, Morris/Benson Area 2
DETROIT LAKES – Leah Thompson made 41 saves in net but Morris/Benson Area fell to Detroit Lakes 8-2 on Tuesday night.
Taryn Picht netted her team-leading ninth goal of the season, Kortney Sanasack added another and Karlie Bruns tallied an assist for the Storm who are 0-8-1.
Leah Honer made 13 saves for the Lakers, Madison Melgard had a hat trick, Emma Coley and Payton Schiltz each had a goal with three assists. Detroit Lakes is 2-9.