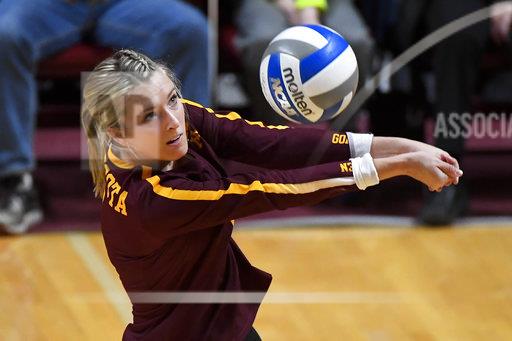 Pittman currently averages 2.19 kills per set and is hitting .356 on the season. Leading the Big Ten charge in blocking, Pittman has 164 blocks this season and averages 1.43 blocks per set. She also ranks second on the team with 26 aces. Pittman has led the Gophers in blocking 18 matches this season and established match career highs in kills (19), aces (6) and blocks (11). She was named the Big Ten’s Defensive Player of the Week twice this season.

Samedy leads the Gophers in kills (340), kills per set (3.04) and attempts (.236). The six-rotation player has also established 295 digs, 23 aces and 106 blocks. Samedy has led the Gophers in match kills 10 times this year and 11 times in match points. She was also a two-time Big Ten Player of the Week this season and also garnered AVCA National Player of the Week. In her junior season, Samedy has also racked up 10 double-doubles.

Hart ranks second on the team in kills (338) and kills per set (3.02). Hart has led the Gophers in match kills seven times this season. During her Gopher tenure, Hart was named the AVCA North Region Freshman of the Year (2016), a Third Team All-American in 2017, an All-America Honorable Mention in 2018 and now a Third Team honoree again her senior year. She enters her final weekend of play with 1,400 career kills and 450 sets played.

McGraw leads the Gophers with 432 digs this season and averages 4.02 per set. She also has a team-best 27 aces and also has 95 assists this season. McGraw has led the Gophers in match digs 16 times this season, including a 32-dig performance earlier this year. McGraw was also named a two-time Big Ten Defensive Player of the Week this season.

It was ranked the 33rd best class by Rivals.com. Clemson had the top rated class followed by Alabama, Ohio St., LSU, and Georgia.