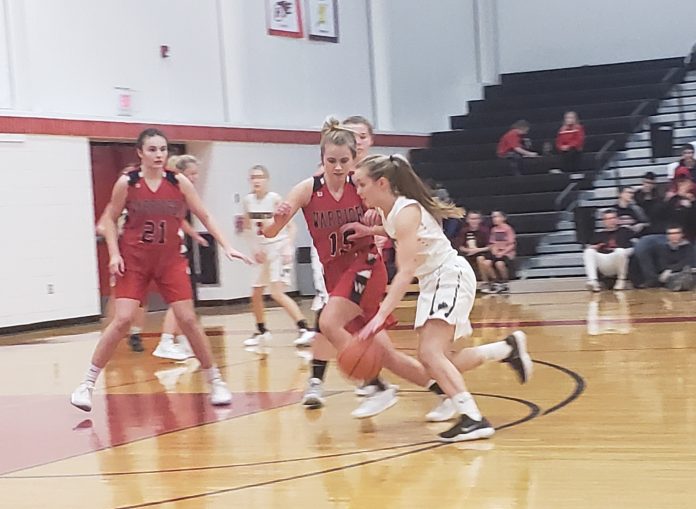 Morris/Benson Area 6, Prairie Centre 3
BENSON – Morris/Benson Area earned a statement win on Thursday with a 6-3 victory over rival Prairie Centre from the Benson Civic Center.
Matt Tolifson broke a 1-1 tie with a goal at 8:33 of the second period and the Storm never looked back, improving to 6-1 on the season.
Six different Storm players scored, joining Tolifson were Will Breuer, Reece Kuseske, Tim Blume, Zach Bruns, and Brady DeHaan.
Blume tallied two assists, while DeHaan, Breuer, Brady Goff, Jack Riley, and Kaleb Breuer each added another. Brady Backman stopped nine of 12 shots he saw in net.

Morris Area/Chokio-Alberta 51, Eden Valley-Watkins 47
EDEN VALLEY – Seven different Tigers scored as Morris Area/Chokio-Alberta edged Eden Valley-Watkins 51-47 at day one of the EVW Invite.
Malory Anderson was the lone Tiger in double-figures with 10 points, six rebounds and eight steals. Kylie Swanson, LaRae Kramm, and Kenna Kehoe each scored nine, and Emma Bowman chipped in seven and the Tigers improved to 4-4. The Eagles are 4-3.

West Central Area 57, Wheaton/Herman-Norcross 44
WHEATON – West Central Area pulled away in the second half before hanging on late for a 57-44 victory over Wheaton/Herman-Norcross.
The Knights led by as much as 18 in the second half, only to see the Warriors trim the deficit to six with four minutes remaining. But the Knights locked down on defense and hit some key free throws down the stretch to improve to 4-2 on the season.
Lexi Bright led the Knights with 19 points, Hailey Bennett added 14 while Kennedy Ulrich pulled down nine rebounds.
The Warriors got 19 points from Maycee Tolifson, Izzy Schmidt had 11, and Brylie Schultz posted a double/double with 10 points and 10 rebounds as they fall to 2-2.

Brandon-Evansville 41, Rothsay 39
ROTHSAY – Brandon-Evansville survived a poor shooting night to slip past Rothsay 41-39.
Keagan Schiele paced the Chargers with 15 points, Tanner Bitzan had 11 as they improve to 5-1. Tanner Heier had a game-high 19 for the Tigers who are 0-7.