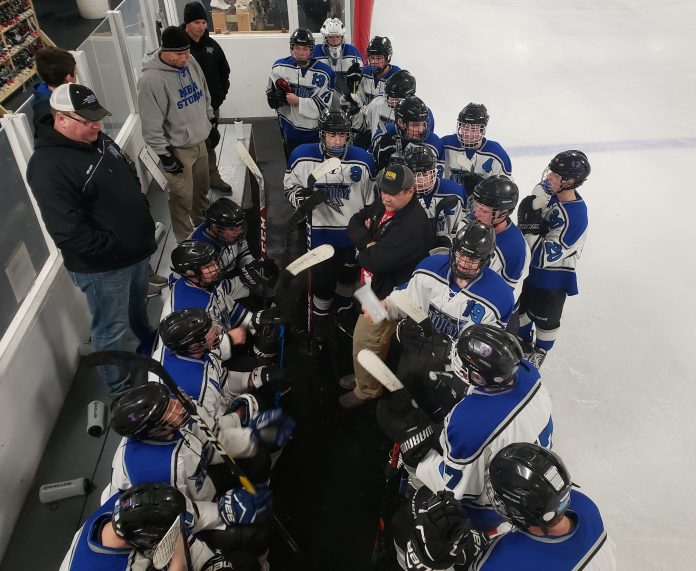 Morris/Benson Area 3, MayPort 1
MORRIS – Morris/Benson Area won their 10th straight game and with it the Storm Holiday Classic title with a 3-1 defeat of MayPort on Saturday from the Lee Community Center.
After a scoreless first period the Ice Dawgs nearly broke through when a shot on an open net was blocked by Jack Riley, off the block Zach Bruns took the puck the other way and beat Kade Susie stickside with his 21st goal of the season to give the Storm a 1-0 lead.
Less than a minute later Kaleb Breur’s shot from the blue line was redirected by Brady DeHaan for the Storm’s second goal.
MayPort made things interesting with a goal from Sammy Satrom with 30 seconds left, but Brady Goff’s empty-netter with 15 seconds remaining sealed the win.
Bruns and Will Breur each had assists while Chase Engebretson stopped 13 shots for the Storm who are 10-1 on the season. Susie made 24 saves in net for the Ice Dawgs who are 4-7.

Prairie Centre 5, Morris/Benson Area 3
MORRIS – Prairie Centre scored four goals in the second period and hung on late for a 5-3 win over Morris/Benson Area in the consolation game of the Holiday Classic.
Chloe Zimmel got the Storm on the board with a goal at 16:10 of the second period, Taryn Picht added two goals in the third with assists from Corrie Erdahl and Allison Michaelson.
The Storm are 0-11-1, while the Blue Devils improve to 3-11 behind a hat trick from Kayla Sayovitz.

West Central Area 56, Pelican Rapids 52
PELICAN RAPIDS – West Central Area prevailed with a 56-52 victory over Pelican Rapids for the Pelican Rapids Tournament title on Saturday.
The Knights iced the game late with a pair of free throws from Tate Christenson with three seconds remaining. Jack Van Kempen posted a double/double with 14 points and 12 rebounds, Gage Staples had 14 points with eight boards, Grant Beuckens chipped in 12 points for the Knights who are 6-1.
Jayden Rutherford had a big game for the Vikings with 18 points as they fall to 5-3.