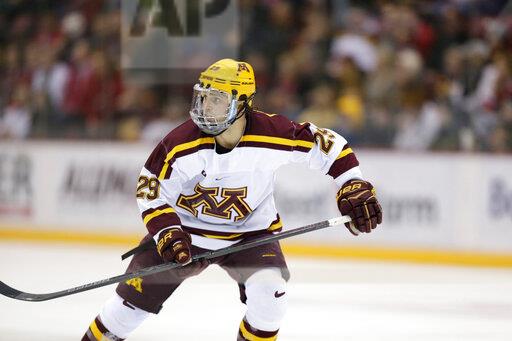 Ten Maroon & Gold skaters tallied points in the win, led by a two-point performance from senior captain Tyler Nanne, while Jack LaFontaine made 24 saves for his second win of the weekend in route to tournament Most Valuable Player honors.

After a scoreless first period, the Maroon & Gold (7-9-4 overall, 2-4-4-3 Big Ten) poured in three goals during the second stanza in less than two minutes. Sammy Walker opened the floodgates with his seventh of the year, striking on the first power-play opportunity of the night at 3:36 off feeds from Robbie Stucker and Ben Meyers. Minnesota would end the night 1-for-3 on the advantage.

Less than a minute later, Nanne added to the lead with his third tally of the season – a shot from the point that snuck through at 4:30 to chase Jaxon Castor out of the net for the Huskies. Jaxon Nelson picked up the assist for Minnesota.

After David Hrenak came in for a relief appearance for St. Cloud State, Brodzinski closed out the quick run for Minnesota with his second of the season after being sprung on a breakaway by Blake McLaughlin at 5:26. Ben Brinkman also picked up an assist on the goal for his first point of the season.

Scott Reedy added his third goal of the weekend and team-leading ninth goal of the season with an empty-net tally at 17:41 of the third period as Ryan Zuhlsdorf and Nanne set up the goal.

St. Cloud State (6-8-4, 3-5-0-0) finally found a way behind LaFontaine at 18:22 of the final period when Micah Miller scored his third goal of the year off an assist from Jake Wahlin.

The strike was the long blemish against LaFontaine on the evening as the junior netminder finished the weekend with two wins and 52 saves on 55 shots to improve to 4-5-3 on the year. Castor took the loss for St. Cloud State, making 11 saves on 13 shots to move to 1-2-0 on the year. Hrenak made 18 saves on 19 shots.

Minnesota outshot the Huskies 33-25 on the night while the penalty kill went 4-for-4 including an impressive 5-on-3 kill in the second period. The Gophers penalty kill has now gone five-straight games without surrendering a power-play goal and has only allowed one tally in the last seven contests.

Earlier in the night, No. 2 Minnesota State shut out Bemidji State 2-0 in the Mariucci Classic third-place game at 3M Arena at Mariucci. Marc Michaelis and Reggie Lutz scored in the first period for the Mavericks while Dryden McKay made 18 saves to pick up the shutout.