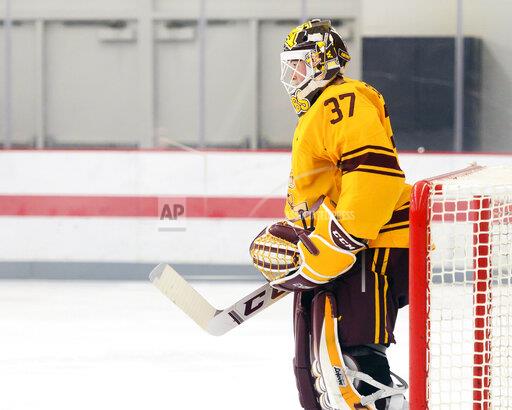 After the Spartans had built a comfortable four-goal lead at Munn Ice Arena through two periods, Minnesota (7-10-4 overall, 2-5-4-3 Big Ten) benefited from eight power-play opportunities in the third period including a trio of abbreviated 5-on-3 chances. LaCombe’s first goal with Minnesota was the product of one of those opportunities as the freshman defenseman buried a power-play goal after being set up by Sammy Walker and Blake McLaughlin.

Michigan State (11-9-1, 7-3-1-0) recorded three points (one goal, two assists) from Patrick Khoderenko while Mitchell Lewandowski and Sam Saliba each tallied a goal and an assist. Gianluca Esteves tallied the eventual game winner for the Spartans.

Jack LaFontaine took the loss for Minnesota, making six saves on nine shots to fall to 4-6-3 on the year. Jared Moe took over for the final 40 minutes and made 14 saves on 15 shots. John Lehemon made 25 saves on 26 shots to improve to 11-6-1 while Spencer Wright played the final 14 seconds without facing a shot.

Minnesota (18-1-3, 10-1-2-1 WCHA) received goals from Taylor Heise, Madeline Wethington, Catie Skaja, and Katie Robinson along with an 20-save effort from Sydney Scobee. Skaja led all players with two points on a goal and an assist.

St. Cloud State (4-15-3, 0-13-0 WCHA) got on the board first with a power-play goal by Hallie Theodosopoulos at the 3:27 mark of the second period after the teams played a scoreless opening frame.

However, the Gophers responded with four unanswered goals on the way to the 4-1 win. Heise tied the game before Wethington gave Minnesota the lead with 2:30 remaining in the second period, and Skaja and Robinson added third-period tallies to seal the win.