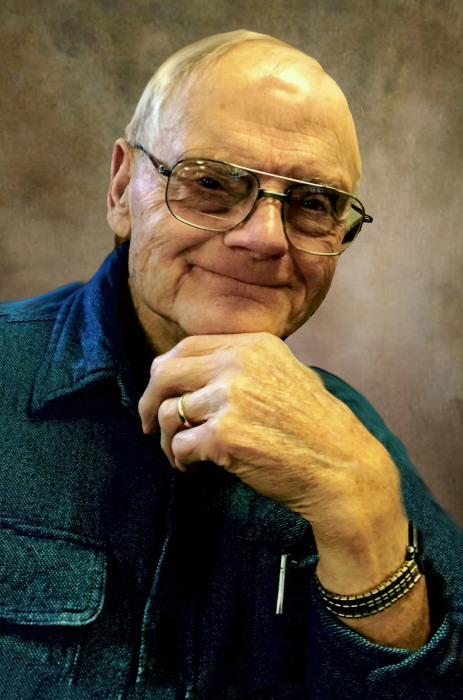 Paul Jost was born April 9, 1926, in Ortonville, MN, to Frank and Wihelmina (Zaehringer) Jost. When Paul was 2 years old the family moved to their farm near Morris, MN, where Paul grew up. He attended a country school and St. Mary’s High School until he was drafted into the Army to serve his country in World War II. Paul proudly served one year as a medic in Japan as part of the post-war occupation force.

When he returned home, he met, and eventually married, Jeanette Gobernatz on July 10, 1947. Paul and Jeanette resided on a farm near Alberta, MN. They were married 72 years and had eight children: Jane (Keith) Ernst, Tom Jost, Carol Geiszler, Nancy (Gerard Voz) Jost, Mary (Vern) DeRung, Joan Jost, Barbara Jost, and Rob (Debbie) Jost. Paul was a farmer and a member of St. Mary’s Church, the American Legion, the VFW, Knights of Columbus for 75 years, as well as served on the Chokio-Alberta School Board, Agralite Electric Co-Op, and the Co-Operative Power Association Board.

Paul retired from farming in 1985. He and Jeanette moved from the farm into Morris in 1992. During this time, Paul received his high school diploma as a result of a program offered to WWII veterans; Paul was a life-long learner. After 26 years in Morris, they moved to Alexandria. Everyone, including children, grandchildren, cousins, and friends, were always welcome in their home. Paul loved attending his grandchildren’s sporting events and loved to watch football and basketball on TV. Paul and Jeanette had a place on Lake Mary where he enjoyed spending time, as well as fishing. He loved to take rides in the country with his sons and always made sure to get in his daily walk. Paul loved to travel and visit with people along the way. As far as Paul was concerned, the world was not full of strangers, simply potential friends.

He is preceded in death by his father, mother, six brothers, and three sisters.

In honor of Paul Jost, the family asks that when you see a veteran, please show your appreciation by thanking them for their service.

In lieu of flowers, memorials preferred to the Midwest Honor Flight.