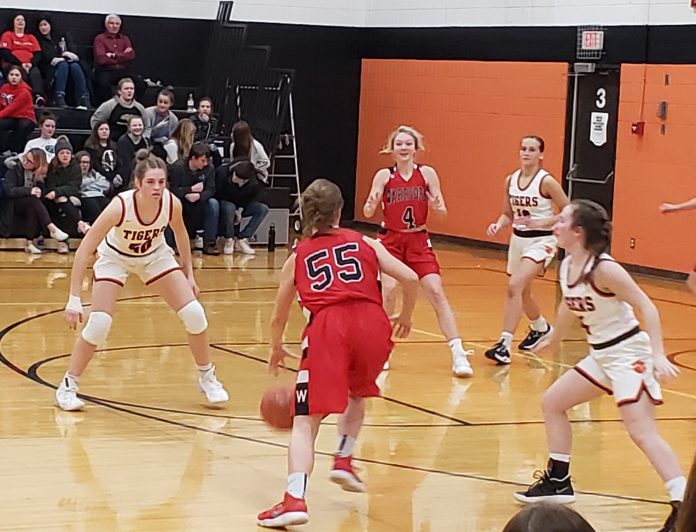 Morris Area/Chokio-Alberta 74, Wheaton/Herman-Norcross 51
HERMAN – Morris Area/Chokio-Alberta raced out to a 10-0 lead and led start to finish in a 74-51 rout of Wheaton/Herman-Norcross.
Second chance points helped the Tigers build their lead, pulling down 14 offensive rebounds and putting up 21 more shots than the Warriors.
Emma Bowman had a game-high 20 points, Malory Anderson narrowly missed a quadruple/double with 12 points, nine rebounds, nine assists, and nine steals.
Meredith Carrington and Kenna Kehoe each had 11 points with five rebounds, LaRae Kramm added 10 for the Tigers who dished out 23 assists in winning their fourth straight game to improve to 8-7 on the season.
Maycee Tolifson led the Warriors with 13 points, Brylie Schultz added 12, Izzy Schmidt chipped in 10 as they fall to 5-6.

Brandon-Evansville 52, Battle Lake 42
BATTLE LAKE – Brandon-Evansville survived a physical matchup by hitting some clutch free throws down the stretch to earn a 52-42 victory over Battle Lake.
Mikenna Pattrin led the Chargers with 16 points and eight rebounds, Haddey Zastrow added 10 as they improve to 10-5. The Battlers are 5-9.

West Central Area 84, Ortonville 31
ORTONVILLE – West Central Area dominated in every facet of the game for a 84-31 rout of Ortonville.
The Trojans opened the game by scoring the first four points, then the Knights woke up and went on a 31-0 run and continued to pour it on, shooting 60 percent from the floor, including 10-22 on threes.
Grant Beuckens led the way with 18 points, Tate Christenson and Jack Van Kempen each had 13 points with eight rebounds, Blake Koloski added 11 points and five assists as the Knights improve to 11-2 on the season.
The Trojans were held to 28 percent shooting, and while 10 players got into the scoring column, none had more than five points as they fall to 4-4.