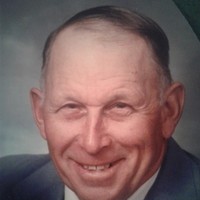 Celebration of Arnold’s life and interment will be held in summer of 2020.

Arnold was born to Peter and Nola (Blood) Ennen on August 29, 1929, near Herman.  He graduated in 1947 from Herman High School and served in the United States Army.

On July 6, 1951, Arnold and Janice Benson were married at Our Saviors Lutheran Church in Norcross, MN.  They resided and farmed first near Norcross and since 1960 at the Ennen farm near Herman.  Arnold had many business ventures besides farming.  He was a mechanic, well-driller, township assessor, road maintainer and did cat and scraper demolition work.  Arnold was an opportunistic inventor, often fabricating his own equipment to complete a task.  He also planted hundreds of trees and shared many volunteer trees with family and friends.

Arnold was preceded in death by his parents; Janice’s parents: Harry and Fern Benson; brother-in-law: Bob Arnold; and sister-in-law: Ardelle Veldhouse and her husband Duane.

Memorials may be made to the charity of your choice.

Arrangements are with Bainbridge Funeral Home of Herman, MN.