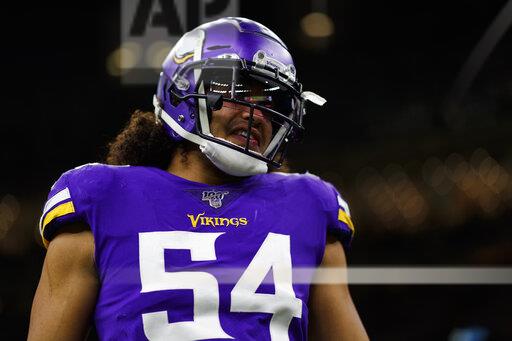 EAGAN, Minn. — A group of Vikings have been added to the NFC’s 2020 Pro Bowl roster.

The game will be televised on ESPN with kickoff at 2 p.m. (CT).

Minnesota is now slated to be represented by eight total players.

Ham’s NFL journey, which began as an undrafted rookie free agent, has seen him develop into one of the league’s best players at his position. He will now make his first Pro Bowl appearance.

Ham was an alternate who will now participate since 49ers fullback Kyle Juszczyk is heading to Super Bowl LIV. San Francisco punched its ticket to the title game Sunday night with a win over Green Bay in the NFC Championship game.

Ham just completed his third full season with the Vikings (he was on the practice squad for most of 2016) and was a key reason why Minnesota ranked sixth in the NFL with 133.3 rushing yards per game. Ham played 354 total offensive snaps in 2019, good for 34.57 percent of the total offensive plays.

The Duluth native helped pave the way for the Vikings to rush for more than 2,100 yards, including Dalvin Cook’s career-high totals of 1,135 yards and 13 rushing touchdowns.

Ham had 17 yards on seven total carries in 2019, but he was a sneaky threat in the pass game with 149 yards and a touchdown on 17 receptions.

Ham joined the Vikings as an undrafted rookie free agent in the spring of 2016 after a productive career as a running back at Division-II Augustana College in Sioux Falls, South Dakota. He has played in 47 of Minnesota’s past 48 regular-season games.

Cousins will make the second Pro Bowl appearance of his career, and first with the Vikings.

A second-round pick in 2015, Kendricks had his best season as a pro in 2019. He had 130 combined tackles (according to coaches’ stats), leading the team in tackles for the fifth season in a row.

Griffen will be heading to his fourth Pro Bowl, all of which have come in the past five seasons (2015-17; 2019). The longest-tenured Viking on the roster, he just completed his 10th season in Minnesota.

Griffen finished second on the Vikings with 8.0 sacks in 2019. He also had 46 combined tackles (according to coaches’ stats), along with 11 tackles for loss, an interception and three passes defensed.

This year’s all-star game will mark Rhodes’ third career Pro Bowl appearance (2016-17) since being drafted by the Vikings in 2013.

The group will join Cook, Harrison Smith and Danielle Hunter at the 2020 Pro Bowl.

The eight players mark the highest-number of Vikings Pro Bowlers since the 2009 season.