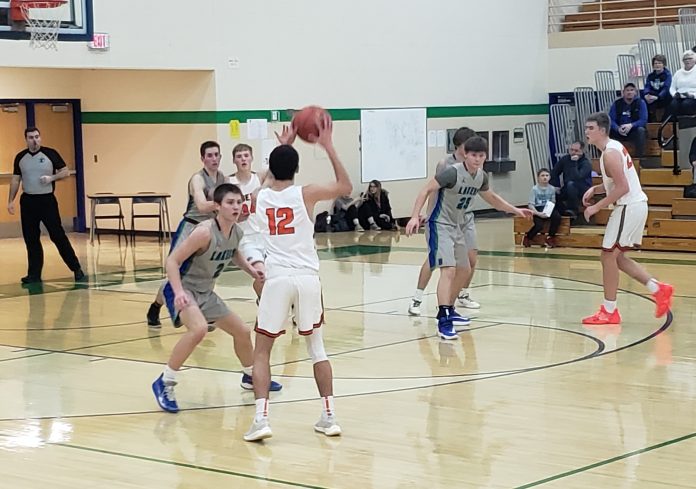 Morris Area/Chokio-Alberta 67, Minnewaska Area 60
GLENWOOD – Morris Area/Chokio-Alberta built up an 18-point second half lead before holding on late for a 67-60 victory over Minnewaska.
Trailing 7-4 early, the Tigers used an 11-0 ran to grab the lead they never gave up, shooting 55 percent from the floor.
Down 18, the Lakers would rally with a 10-0 and eventually trimmed the deficit down to just six with 1:30 remaining, but the Tigers hit clutch free throws down the stretch to seal the win.
Jackson Loge posted a double/double with 17 points and 11 rebounds, Toby Gonnerman came off the bench to score 16 with six boards. Durgin Decker and Brandon Jergenson each added 10 for the Tigers who have won five straight and at 7-5 on the season.
Minnewaska was led by Aaron VerSteeg with 18 points and seven rebounds, Peyton Johnsrud and Sam Hested each added 13 points as they fall to 9-4.

Ashby 49, Hancock 48
HANCOCK – Hancock came up on the short end of a Pheasant Conference battle that went down to wire with a 49-48 loss to Ashby.
The Owls hit eight threes on the night but went just 6-13 at the foul line and couldn’t slow the presence of Arrows big man Jaden Norby who had a game-high 22 points.
Hunter Norby had 13 points for the Arrows who have won six straight and are 10-3.
Daniel Milander led Hancock with 13 points, seven rebounds and nine steals. Matt Thompson added 12 points with six boards but the Owls saw their four-game win streak come to an end, falling to 7-5.

Sauk Centre 59, Morris Area/Chokio-Alberta 47
MORRIS – For the second time this year Morris Area/Chokio-Alberta went toe-to-toe with no. 1 ranked team in the state, but again came up just short witha 59-47 loss to Sauk Centre on Tuesday from the Tiger Center.
The Tigers were held to just 29 percent shooting but were able to keep the Mainstreeters contained and the game close throughout.
Kendra Wevley led the Tigers with a double/double, scoring 13 points with 11 rebounds. Malory Anderson had 11 points with six boards and five assists, while Meredith Carrington added 10 points. The Tigers are 8-8 on the season while Sauk Centre improves to 15-1.

Hancock 62, Ashby 43
HANCOCK – Hancock shot 50 percent from the field in a 62-43 rout of Ashby on Tuesday.
Rylee Hanson led the Owls with 19 points and six rebounds, Morgan Kisgen scored 12 points, while Lexi Staples added 11 with six assists. The win snaps a four-game losing skid for the Owls who are 10-4 on the season.
Kalista Aamot led the Arrows with 20 points as they fall to 3-13.

Underwood 49, Brandon-Evansville 34
EVANSVILLE – Brandon-Evansville was held to 31 percent shooting in a 49-34 loss to Underwood.
Haddey Zastrow and Mikenna Pattrin each scored nine points, Brittany Korkowski added seven with nine rebounds. The Chargers are 10-6, the Rockets improve to 10-5.

Melrose 140.15, Morris Area/Chokio-Alberta 117.5
MORRIS – Melrose defeated Morris Area/Chokio-Alberta 140-117 in a gymnastics dual meet from Morris on Tuesday.
Taylor Kill took third in All-Around to lead the Tigers. Kill added a pair of fifth place finishes on Beam and Floor.
Callie Snell took fourth in All-Around, Faith Butterfass finished fifth. The Tigers final dual meet of the season will be on Thursday against Marshall.