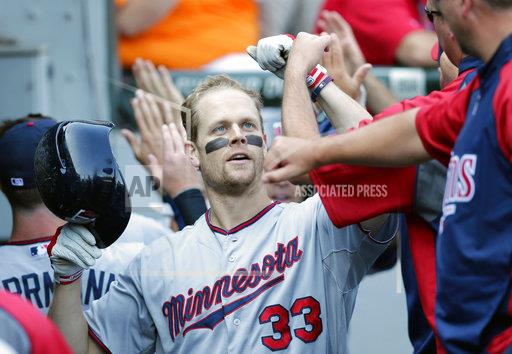 MINNEAPOLIS — Growing up on the western coast of Canada, Justin Morneau was, of course, coaxed towards the national winter sport of hockey. Could he have made a career out of that?

“Not good enough,” Morneau said. “I played one game of junior hockey as a 16-year-old.”

Perhaps it was best for everyone involved, then — and certainly for the state of Minnesota — that Morneau fully turned his attention towards baseball. And he proved plenty good enough at that throughout a 14-year Major League career that he earned the honor of becoming the 34th member of the Twins Hall of Fame, as announced by the club on Friday.

“The Minnesota Twins are thrilled with the election of Justin Morneau to the Twins Hall of Fame,” said Twins president Dave St. Peter in a statement. “Justin’s brilliant career — defined by an American League Most Valuable Player Award as well as his leadership role on the field and in the community — makes him one of the greatest players of his generation. His impact on the Twins organization and Twins Territory in general is significant.”

Morneau will officially be inducted into the Twins Hall of Fame in an on-field ceremony prior to the Twins’ home game against the White Sox on May 23. He joins Kent Hrbek as the only first basemen to earn the honor, as voted on by 71 members of local and national media, club officials, fans and previously elected members.

The Canadian was a homegrown talent who was originally selected in the third round of the 1999 MLB Draft before he debuted with the big league club in 2003. His 11-year career with the Twins encompassed 221 home runs, 860 RBIs and 289 doubles among 1,318 hits. He was named to four American League All-Star teams, won two Silver Slugger Awards and won the AL MVP Award in 2006.

“I think this is the ultimate honor for a player,” Morneau said. “To come through and be drafted by this organization — I remember the day I came and hit was about a week after the Draft, and Corey Koskie kind of took me under his wing. I took some batting practice in the Metrodome. On that day, I couldn’t imagine a day like this, to be inducted among the greatest players in franchise history.”

Morneau ranks second in Twins history in games played at first base (1,124) and ranks third in home runs, sixth in RBIs and eighth in hits and walks.

The first baseman became a fan favorite not only for his production and partnership with longtime teammate Joe Mauer as the core of five division championship teams, but also for how quickly he established himself as a leading figure in his adopted Minnesota community. He was honored for his longtime service to the Twin Cities on Thursday, when he earned the Kirby Puckett Alumni Community Service Award at the club’s annual Diamond Awards benefit show.

“It was hard for me to do that when I first came up, because I only thought of myself as a baseball player and not as a role model, not as someone who wanted to be in the spotlight,” Morneau said. “But then I realized that I could make a visit to the children’s hospital and put a smile on a kid’s face when they’re going through a tough time. It starts with little things like that and then it kind of all adds up, and you realize that it gets passed along.”

Morneau still makes his home in the Twin Cities and remains a visible figure in the organization as a special assistant to baseball operations and a color analyst for the club’s television broadcasts on FOX Sports North, a role in which he should take a more prominent position this season.

“When we land here at the airport, I come here and it feels like home,” he added. “It’s because of the people and the fans and the friends and the community and everything else. … When it started, I probably wouldn’t have said that. But now, I can’t see myself anywhere else.”

Neither can the Twins. And that’s why they’re carving out a permanent home for him at Target Field alongside their other legends.